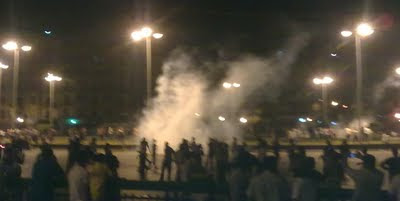 It’s back again with all the violence, injustice and misinformation. One has to wonder, was it ever gone? The beast lay dormant in its cave waiting for the wounds to heal and now it strikes again.
Everything’s the same.
The events of yesterday prove beyond a doubt that we’re back to where we started. The families of martyrs are being punished for demanding justice. In this country we live in, there can be no justice and to demand it is close to blasphemous. Military personnel are infuriated by the word because they simply don’t believe in it. The police forces are crazed with madness when it is demanded because they are incapable of providing it. All the regime knows how to do is violence, and they’re doing it again.
What started out as hundreds of protesters turned into thousands as hundreds of people and activists rushed to the square. The scene was reminiscent of the night of 25 January when police forces violently evacuated the square. Going through to morning it is more reminiscent of 28 of January as police insists on clashing with protesters and using violence against them.
New tear gas canisters freshly imported from the US have been used this time. They’re smaller, not expired and with a very long range. It seems hypocritical of the US to reprimand violence against protesters and yet continue to supply the corrupt regime with ways to subdue them. You can tell from Obama’s face during his speech that he was sad at the loss of an ally like Mubarak, despite his well chosen words.
Everything’s the same.
The media is back to its dirty tricks. Lies are propagated by the Prime Minister and the Minister of Interior. The police are hiring thugs to do their dirty work.
There were thugs in the square as the media claimed, but they were dressed in police uniform. The faces are of those who were in the revolution and I know for certain that I felt no danger from them. The real danger came from the police who do not show any signs of change.
The military try to play good cop, but it’s getting too old. Good cop, bad cop won’t work if you show no signs of fairness and if your actions don’t match your words.
People were attacked and abused and battered but they remained resilient. That is the one difference between last night and the night of Jan 25 is that people stood their ground. The fear had gone.
I guess I was wrong earlier, not everything’s the same. People have changed.

Posted by Wael Eskandar at 1:39 PM No comments: 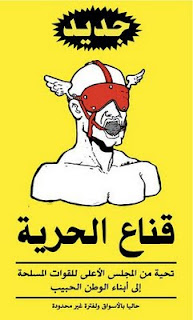 (The Mask of Freedom -Regards from SCAF to the children of our beloved nation)
It is no secret that I’m vehemently opposed to the Supreme Council of Armed Forces ruling the country. The numerous issues I have with SCAF are rather objective but I would be lying if I said these issues weren’t personal. The reason they can’t not be personal is because I am an Egyptian citizen and I take injustice inflicted upon Egyptians personally now. I take injustice inflicted about those who stand for what I stand for personally. So when men are tortured for protesting and women are subjected to virginity tests, I take it personally as we all should. It is our apathy that led us here in the first place and such apathy must stop. We must learn that injustices upon others that take place unchecked will eventually end up hurting us or someone we care for.
How can we condone tyrants, murderers and criminals? You say that we’re not, but our silence in the face of injustice makes us complicit in such troubled times. To be afraid of the consequences of facing the truth is deplorable. To delude ourselves into thinking that our fight for justice is over in 18 days is unacceptable.
For those seeking objectivity, I advise them to do a practical exercise: Go through all the communiqués delivered by SCAF and highlight the promises made and compare them to what has been done. I don’t mean started and I don’t mean about to start, I mean done as in completely scraped off that long list of promises. The number of unfulfilled promises is overwhelming, including things that could be done within hours of the communiqué like retrying some of the prisoners or pursuing the corrupt.
How is SCAF different to the previous government of broken promises? They were handed power by a trusting people only to abuse it and pretend the revolution was theirs to claim. They were never with the revolution. Not shooting protesters when they are in large numbers is not enough of an accomplishment. They have hurt smaller numbers when they knew they could do so without defeat. They have arrested protesters and tortured them when there were no great numbers to resist their arrest. They have sentenced innocents to military prison in a matter of hours when there were no lawyers to defend them. How are they different to the previous regime I entreat you.
The first thing we need to see is that Mubarak is still alive through SCAF. When we went out against Mubarak it wasn’t against his person, but his practices. No one was able to speak up against Mubarak when he was in power. No one is allowed to speak up against SCAF now that they are in power. How different are the SCAF practices to Mubarak’s? All we hear are unfulfilled words and statements that conflict with eye witness accounts.
I remember hearing Tharwat Badawy on television once saying that no one who ever comes to power ever relinquishes it. I strongly believe that this is true except for a few rare exceptions, but these men are no exception. They are men hired by Mubarak and he taught them all the tricks. If the SCAF were ready to show a sign of good will, they would have shared some of the power with civilians and yet to date, no civilian was involved in any decision regarding the fate of the nation.
Everything we took, we took by force and none of the promises they made voluntarily were truly fulfilled. They have given us as much freedom as we were willing to take by force, and have ordered a media blackout. The few rights we fought for will slowly be reclaimed, for they see us as petty slaves and view themselves as our masters.
It takes a blind person not to see this, and yet many are still blind. Yet it is the blind who are content with the abyss. I would rather be dragged there than willfully plummet.
Posted by Wael Eskandar at 12:52 PM No comments:

It's repetitive and inconsequential to write a post about sexual harassment but I'm writing it anyway. I'm writing because even though this post won't change a thing, we have to keep talking. We have to keep bringing up the things we want changed until we find a way to change them. We have to keep acknowledging the problem before we know how to solve it.
I have no solutions offered in words because I know that the real solution is offered in action. Change comes first from the moments we choose to speak and then from the moments we choose to act.
The Egyptian streets are filthied with garbage, dust and dirt, but nothing on these streets is dirtier nor uglier than sexual harassment. The act of harassment is symbolic of numerous vices. The disrespect of human beings, invasion of privacy, hypocrisy and poor character. It is the greatest sign of the weakness of the male gender in today's Egypt and the resilience of women in the face of adversity.
If there is one thing I would change about Egypt, it would be sexual harassment. It threatens my freedom and fills me with shame. We have no excuse not to stand up anymore because it works. If we do it consistently enough, we would be able to greatly affect the rate at which it happens. We have many tools to help us do this. We have a revolution on our side, we have education, tazers, language but most of all, we have right on our side and that is the most powerful weapon.
Posted by Wael Eskandar at 5:04 PM 1 comment:

The Military Council had no choice but to save its skin and pretend to be with the revolution. Any order to shoot the protesters at a time when right and wrong were so obvious in Tahrir square would have meant the end of all the benefits the military Generals were reaping. The army of Egyptians would have been split. Some would have been loyal to the Generals and some loyal to the people. In any case it would have meant the disruption of the wealthy lives of the military commanders.
We kept shouting a lie, hoping it becomes true, that the army and the people are one. They never were. The army was controlled by the SCAF and they extended their control to the minds of most Egyptians who cannot accept the reality we're faced with. It's still the game of security, that the country will collapse without the SCAF and yet it is the collapse of this nation that has risen up that they wish to achieve.
Some things have changed, the people have become more aware and more political, but our rulers have become more ruthless and intolerant. The SCAF now intimidates freedom more than the past regime. No media is allowed to speak ill of them, remind you of something? They kidnap, torture and unjustly try innocent people who have no chance of defending themselves, remind you of anything? They make promises they never keep and fill our television stations with propaganda, remind you of something?
If you're not reminded of dictatorship and tyranny, then you're blind. It's not that you're blind really, but you're closing your eyes and you do not want to see the truth of it. Today an Egyptian is defined by his defiance of injustice and if you do not want to see injustice, then you're not Egyptian. This is not the definition that hundreds upon hundreds of martyrs died for. We are rewriting this definition to stand for justice and you will not be part of of it if you close your eyes.
The evidence is out there, and clear as day light. All you need to do is open your eyes to see it. Don't rely on your hearing to detect light. Don't ask these questions like 'where is the evidence? I can't hear it'. You cannot hear light, and you cannot see sound.
We are at a crossroads. We have been resurrected after decades of death. We knew our enemy and we now know how to fight the enemy. The same enemy comes in a different uniform. We must, not only open our eyes, but raise our shields and sharpen our swords. Our enemy is tyranny and injustice, it always has been. If we cannot tell the truth, then this resurrected body will die once more, and this time we will be the murderers.
Wearing a uniform is not a good enough excuse for men to inflict injustice upon other men.
Posted by Wael Eskandar at 5:52 AM No comments: