Survival Is Also a Form of Resistance 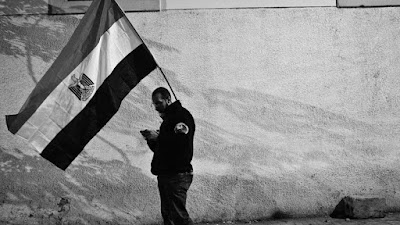 It has been difficult for me writing this piece. I was asked to write something for the anniversary of the #Jan25 revolution. I struggled. What was the point of writing. What was the point of sending this out as our world seemed beyond that which words can remedy. My first draft was a political narrative. Factual, impersonal, perhaps even accurate. The night before I couldn't just send that in. Our story was not about accuracy or simply facts. Our story goes on through our struggle to escape hope and find it. I rewrote it when it dawned on me that the most important part of our struggle is personal, not public. I struggled with words, with emotions, these are eight years and our experiences are full of emotions and we're at different stages of grief, of recovery.

All the words seem lacking, but I tried to find them with the little energy I had to describe us. I'm aware they don't do us justice. Yet, with all the flaws of expressing where we're at, I'm grateful to have used some of my energy to document some of my struggles that I believe are shared by many. And on a day like yesterday, it felt that I was not alone struggling in the dark. We are all collectively struggling, everyone in their own way, a battle to remember, a battle to forget, a battle to survive.
Our memory has been resilient in the face of seemingly infinite resources trying to crush it. It's worth something to keep remembering. It's worth something to keep trying to survive. It's worth something to hold on to that one thing that was genuine in our lives, that we were blessed and cursed to witness and be a part of. I don't know what that something is, but I often feel it when we connect. We shared something real that is somehow beyond words.
I was never a romantic dreamer, and the reason I write these sentiments is because I've questioned them a thousand times over to make sure they were real and not just some naive romanticization.
The revolution continues in our struggle and our trauma, but perhaps what I never mentioned is that it continues in the integrity we hold on to.

Posted by Wael Eskandar at 12:40 PM No comments:

A long forsaken blog. Blogging might be dead in some way. Writing is not. I have allowed the blog to die over the years as social media started to take hold of distribution. A facebook status or a twitter post were a replacement. Mostly because the point was about influencing people at a time of political fluidity. The dreams of contributing to a positive change died slowly as people in Egypt turned their back, not to blogs, or social media, but to the question of morality as a whole. What is the point of persuading people who do not want to act based on morality but opt for an notion of pragmatism that is rather impractical and only serves to camouflage their moral bankruptcy.

As time has passed, the social media companies are controlling our content, siding with oppressive governments for an easy buck. It may not be the time to influence but to archive and document once again like the pre-revolution times. This year I will try and document some of the thoughts independent of transient social media. This platform now is far from perfect, but at the very least attempts to evade the continuous data games that are carelessly played by big social media companies who aim to control the spaces they once claimed were free.

My time in Cairo is full of observations, social now, less political. As I walk through the streets my mind wanders to various things from seeing the potholes, the frail infrastructure and the economically defeated faces on the streets.

Maybe I'll write once a month, or once every two months, but I will attempt to keep this going like once before and if I don't, I'm asking me to forgive me, because I know how overwhelming it has become to try and express myself in the face of trauma, depression and the frequent visits of hopelessness. I can only remind myself that even then it may have some value to express how I feel.

I'm hoping to be able to find more personal dispatches in the future worth noting. Or maybe this is just a brief awakening that won't last. Who knows.
Posted by Wael Eskandar at 9:43 PM 1 comment: