There’s a significant element of humor in the episode of Morsi adjusting his genitals in three quick moves and I’m sure many had a good laugh about it. It’s no secret that many Egyptians do that sort of adjustment shamelessly in public. In fact it’s common enough that there’s a term for it, “Habrasha”.

My guess is that the move is not acceptable by most standards of civilized society. This is something I’m sure parents tell their kids as a minimum acceptable level of social behaviour: Don’t touch your private parts in public.

The real problem with Morsi’s Habrasha is that he probably knew it was not an acceptable thing to do in public. This I find insulting, not because the move is socially unacceptable, but because he knew he was not supposed to do this but expected to get away with it.

Morsi adjusted his private parts in what he thought was a stealth manner with the façade of adjusting his jacket. He expected to have camouflaged it well. All eyes and cameras were on him and yet he was trying to pull it off. Don’t underestimate the move as just a slip-up; it reflects a prevalent attitude amidst Muslim Brotherhood members. The same attitude can be seen as members of the Brotherhood blatantly lie and expect everyone to believe that the lie they had said was not in fact a lie; that the positions they have taken against the revolution were not in fact against the revolution; that their duplicity was not in fact duplicity.

Morsi is messing with our hopes of democracy, all eyes are on him and yet he continues to take repressive measures adjusting to the interest of his group. He does not care if we’re on to him, he’s camouflaging his attempt with empty words we are asked to believe. There is a total disregard for what we want and what we will accept, and out of sheer habit he will do what he thinks is in the best interest of his group rather than what is expected of him by others.

Morsi was representing a country not just himself. Not touching his private parts was equally expected of him as it was to shake hands with world leaders, women included. He was expected to represent a country and should he desire, play with his privates all he in the privacy of his palace. Yet such small demands he was unable to fulfil either because he was unaware of what is asked for him or simply didn’t care.

When Reason Fails, Build Another Wall

The subject of walls is well worth commenting on in relation to the events of this past week. A wall has been erected by the military to prevent clashes. Needless to say, walls don’t address problems but defer them and exacerbate them on most occasions. It should be needless to say but it isn’t. Those building walls need to hear it and comprehend it. However, (shocking as it may be) I don’t entirely blame the military for resorting to such an action. Everyone else is doing the same. Everyone has been actively putting up walls. 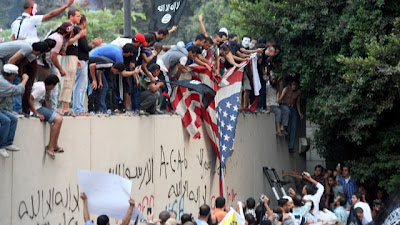 For commentary to the events themselves, there are several pieces that can be interesting, such as Hani Shukrallah’s opinion piece, Jadaliyya's article or Evan Hill’s analysis, but I’m more interested in walls.

Those protesting have erected the biggest walls. Abu Islam, owner of a TV channel burned a bible while people cheered on and later bragged about it, threatening to piss on it the next time. A protest in Australia has women in veils showing a sign insulting the deceased Egyptian Pope Shenouda III. The protests have taken on a life of their own and extended to numerous Arab countries such as Libya where the American ambassador and his aides were killed,  Lebanon, Sudan and others.

The protests have been building walls that do nothing but exacerbate the situation and push forward the rhetoric that the film aimed at proving. This is not a medieval time where history is re-interpreted, angry Muslims are writing their history now. 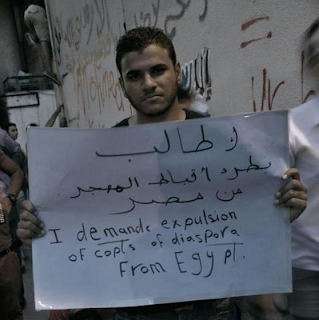 The walls put up by protesters are more dangerous than the military’s but they have a similar effect. Decisions taken by a few and their effects will influence the lives of numerous others. As the select few wreak more havoc, more and more lives are endangered and the walls keep getting higher.

An onset of Islamophobia is to ensue, and why not? There is reason to fear Muslims given the news. A second rate movie caused deaths and destruction.  The majority of Muslims did not react this way, but could this eliminate the fear of the few who would?

The walls being built are becoming insurmountable and I’m not sure what the answer to it is. Tolerance perhaps, but if a group of people cannot tolerate a movie and punish others for what they haven’t done, how can they expected that those who did not partake will not be punished for the wrongdoings of their brethren?

Posted by Wael Eskandar at 3:23 PM No comments: