The Power of Despair 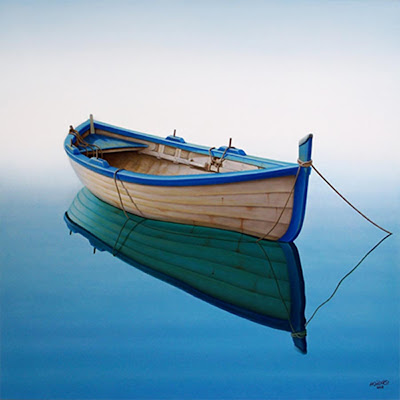 I’m no longer driven by hope but by despair. It may seem odd, such choice of fuel, but it’s one that never seems to run out. It is the ocean and hope is but the oil spilled upon its surface by some twist of fate. The ocean endless, as it seems, but past encounters of oil, make more of it a possibility. To me hope seems like the accident that stirred a raging sea of despair to silence. Except that, hope is the life giving water and despair is the poisonous oil. I use the metaphor for size.

Somewhere along the road I realized we were not destined to win. It’s not that we were defeated but I realized there will be no definitive moment of triumph where one can decidedly rest. All we’ll have are moments that seem like victories which we’ll discover to be milestones that may be easily swept away from underneath our feet.

I fell into the ocean realizing the futility of trying. I fell and tried to fight it, but as I searched for changes to comfort me, I recognized one unchangeable fact: that I had changed. Who I changed to became more important than where I am at. I may stumble upon victory or hope, but the real triumph is of the soul.

I realized that all I needed to worry about was who I carried with me on this journey. I realized  that  who I carried along, was me. Along the way, inside that sea, I saw many and I recognized myself in them, and hoped they recognized themselves in me. Too many were sinking, looking for that blotch of oil, but in that search, by existing, it was them that kept me afloat. It is in them that I experience small triumphs; in them that I bore the poisonous sea.

So I glide through the sea, hoping to stumble upon a patch of life giving oil. It was that which kept me going at first, but in the end I realized it may not even be oil that we find. Yet we’re all searching for the patch of oil, that safe place where a glimmer of victory can be glimpsed. Some keep on swimming in that hope, some rest their backs upon the sea and look up to the sky, reflecting on past hopes. Some dive underneath for a while and close their eyes, but despair is not so easy to live with, they must come up for air. Many like me, still struggle to keep their head above the water, half immersed in despair, half breathing the air.

Then once in a while we find just enough of us, standing close enough, speaking to and hearing one another. That is the blotch of oil we seem to stumble across from time to time. I recognize that oil in those around me and that is what keeps me going and that is why I do not let go.

Challenges to Finding Your Moral Compass

The past few years have been trying from a moral point of view. I find myself having to make moral choices every day about new and strange situations that are not out of a book but before my eyes. It hasn’t only been trying, but also tiring. Every time I need to make up my mind about something I must go through piles of data and try to discover what of it can be treated as real information. Who can I trust? What can I read out of the truth? What can I read out of the lies? 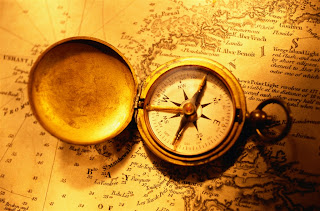 There’s too much to read, too much to look through, too many lies to sift through. In the end facts are not enough. They have to be put together through reason. Reject the impossible, entertain the possible, verify what you can through circles of trust, figure out if they’ve been lied to. Then you have to look through your moral lens and make up your mind and on occasion adjust that lens.

How does one react morally to events around? Over 500 people were killed. The police only claimed 10 machine guns were found. How can this number justify the number of deaths? On the other hand over 40 policemen were killed which makes this a combat not a massacre. At the top level it’s easy. The MB leaders take the most blame for bringing us to this point, whoever is running the state whether military or state security next for ordering the dispersal and police for utter brutality. But that’s not enough, the intricacies are puzzling.

MB leaders have called upon their followers and put them in harm’s way but are their supporters without agency? What kind of parent takes their child to a protest that will be dispersed imminently? What kind of protester continues in an armed protest to act as a human shield? What kind of protester picks up arms to fight using other unarmed protesters as human shields? Those human shields do not shield off anything, both sides want them dead. The MB to raise the death tally to further entrench their position as martyrs after their autocratic rule, the state and security forces with the blessing of the spectators, the Egyptian people.

What moral ground permits supporters of the sit-in to attack churches across Egypt in retaliation to their forced dispersal?

Some mad men lead the country into a vicious cycle of madness. How does Beltagy feel about his daughter dying? Is it for a just cause? The life of a beautiful young woman cut short with no chance to live out her future and see what she can become. Was it worth it?

Was it really worth it, this thirst for power that only brought about injustice? How about all the lives destroyed of the Brotherhood followers or innocent Copts whose livelihood was targeted. What was it all for?

But how about everyone else, whose life was destroyed by the MB? All they want is to live without an oppressor, who not only wants to steal their present but also their future and their children’s future. They want an army to protect them from MB, an army to kill them all. Do they realize that this army will take away what’s left after the battle is done?

There are many questions to balance out together, much more think of a way out. My loyalty is to my values, not to any group, secular or not, liberal or not. But with all the tiredness I feel on a personal level trying to figure things out, and how tiring and trying my journey is, I feel pleasantly surprised when I see a few, not too many, not too little, reaching similar points, trying to answer questions seriously, trying to find out the truth earnestly. I don’t know how troubling their journey is to them, is it as arduous as mine? I hope not, because my journey is driving me into exhaustion. Yet it’s finding others who arrive to the same point that gives me hope to go on and assures me that it’s worth the trouble.

AlJazeera Caught in the Act 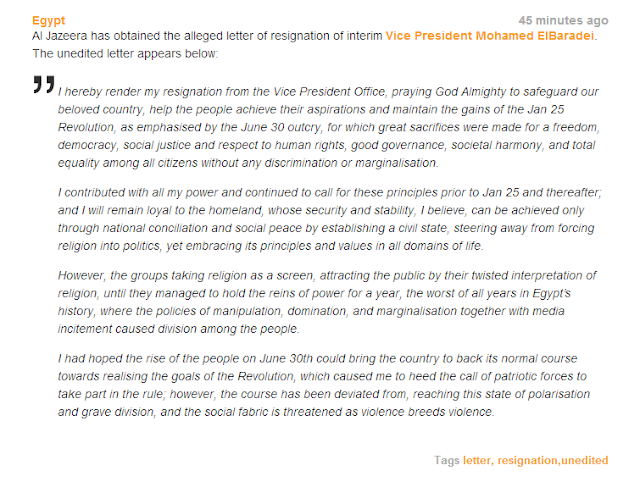 The reason is perhaps because ElBaradie talks in the last two paragraphs about how he was for more peaceful solutions and that this day is in the best interest of extremist groups. In any case, it is a serious omission and if it causes a ruckus, I'm sure it will be described as a technical editing mistake.

Here are the remaining paragraphs as translated by Egypt Independent :


As you know, I was for peaceful alternatives to resolve this discord, and there were suitable solutions conducive to national consensus. Then happened what happened. From similar experiences, we can say that reconciliation will eventually take place, yet after paying a price that I believe we could have avoided from the beginning.

I can no longer bear responsibility for decisions that I do not agree with, and whose repercussions I dread. I cannot be responsible for a single drop of blood before God, my conscience, and my people, especially that I believe the dropping of that blood could have been avoided.

Unfortunately, the beneficiaries of what happened today are the extremist advocates of violence and terrorism. And you will recall what I am saying.

God save Egypt, its great people and its valiant army.

Posted by Wael Eskandar at 7:51 PM No comments: