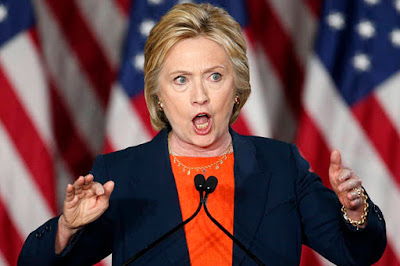 Early polling showed Bernie Sanders beating Donald Trump. In those early polls Hillary Clinton lost to Trump. I don't personally believe polls are accurate in general, but many do. What that means for believers, is that they chose a risky route. They wanted Hillary to win the primaries even though the DNC would have come to power more assuredly if Bernie was it's nominee. In fact those voters were Hillary or bust.  They turned down the candidate who was closer to democrats on the issues because they gambled on Hillary changing her popularity. I'm not generalizing or judging motivations, maybe they thought she was a better candidate, maybe they didn't like Bernie, I'm talking about the practical implications.

When push came to shove Bernie rallied for Hillary because he realized the Trump danger early on. The DNC on the other hand, wanted to destroy Bernie. It was not because he wasn't aligned with them on issues, but because they had special interests. Maybe they thought Hillary was a better leader, maybe they thought Bernie wasn't capable of delivering, but still, they too gambled on liberal resources rather than weighed out what's more aligned with their platform.

One thing I respect about Bernie is that he stuck to the issues. Following her triumph over Bernie, Hillary shifted her focus to one thing, how she isn't Trump. Hillary was silent on most issues, she did not want to gamble her connections with big businesses once in the white house so that her words won't be used against her. In effect, she wasn't able to win over a bigger base.

People did their part and she won the popular vote, mostly out of fear of Trump. However, the question that that needs to be asked is: what did she do to try and win over those who wanted a better economy for themselves and who know for certain that the status quo wasn't good enough? Did she promise a better economy for them like Trump's empty promises? Not so much, and it's because Hillary knows the value of words and chose hers wisely. That is something we can respect Hillary for, she tried not to lie about her positions on issues so that they do not haunt her while in office, but that came at a cost. In effect, Hillary became silent about most issues that weren't instigated by Trump, she never called him out, she just responded to his silly ludicrous claims. She missed most opportunities outside the 'glad I'm not Trump' zone, and failed to comment meaningfully on something as obvious as the Dakota pipeline.

Hillary sat on the fence and hoped that Trump's stupidity would be enough. It wasn't. Mocking Trump and avoiding the issues gave his poor supporters no alternative but to challenge the status quo. The politics of fear were employed and even though fear of Trump did not deter voters, the politics of fear won. The real fear here for the working class was the continuation of the status quo. Hillary Clinton did not alleviate any of that fear.

Those who support Hillary are probably happy with the status quo to a great extent. There is currently a president from a discriminated group. I do not deny that a woman president would be progress, but to those whose lives will not be bettered it's cosmetic. Obama bailed out banks, lead drone wars, came after whistle blowers and under his presidency big businesses thrived and continued to make colossal profits. This simply isn't good enough for most.

I'm certain there are many who chose Trump for his racism, but what about winning over those who just wanted a shift in the status quo? What has been offered to them beyond cosmetic check boxes of progress?

There is something wrong with a country that would vote for a vile character like Trump simply because they are unhappy with the status quo. While people should be accountable for their bigotry, there are many reasons why they ended up that way. Media was sensationalist, catering to their base, on both sides. The liberal media focused on Trump and his crazy supporters. It may have been better to identify what is really wrong with the country rather than what is wrong with Trump and his supporters.
Posted by Wael Eskandar at 2:09 AM No comments:

Egypt Digs Itself Back To 1977

Where Hope Lies in Egypt 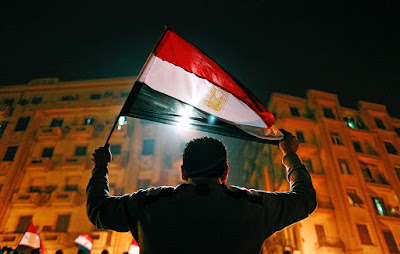 This article was published in DNE on 2 November 2016.

As calls for protests garner more attention from the media and citizens who have long ignored them, many serious questions about Egypt's trajectory arise. This is perhaps Egypt's most disheartening moment in recent history. Besides the unprecedented scale of human rights abuses, it is obvious to dwellers and onlookers that Egypt's economy is swiftly spiraling towards collapse. The leadership is struggling to keep its head above water, as the long sought after hope of political stability turns frail.

What makes the moment more tragic is not the absence of hope but its fleeting presence. Egypt's path to recovery has long been clear. Yet, the economic interests of the policy makers have stalled any political will to execute them. Economic figures aside, future prospects are primarily based on trust. As conditions worsen and the interests of the political elite become clearer to the average citizen, trust in Egypt's present leadership withers.

Egypt's economic ills are but symptoms of its political ailments, and they require urgent redress. Egypt needs direct political reforms to establish a system capable of executing long-term plans beneficial to the country's future.

At the moment, the majority of decisions are taken by non-elected officials belonging to one security apparatus or another. They have three major motivations: narrow individual interests, securing the present regime, and a revenge agenda against Islamist or secular opposition. Their decisions are not subject to oversight. The parliament's handpicked members are more a representation of security agencies than of the people.

Similarly, the entire political system lacks cheques and balances. There is no manner to challenge decision makers without paying a heavy price. Egypt's top auditor, Hesham Geneina, was removed from his post after releasing statements about his report's findings that indicated mass corruption. In theory, that ought to have triggered an investigation into the government bodies accused of financial violations, but the opposite happened and Geneina was referred to trial.

The absence of balances has also corrupted the market in Egypt. While the army's role in the economy has long been established, the army is now, more than ever, directly involved in policy. This means that generals control the army's share of contracts and the shares of non-military owned companies in the market. Hence, it is not just the army's economic empire that affects the market, but rather the complete hegemony over economic and business policies.

Many civilian companies are subcontracted by the army, but they have no means to litigate against the army if they are extorted in some way or another or their payments delayed. When the army does business, it does not pay taxes; it utilises poorly paid conscripts, and its budget is not subject to parliamentary oversight. Even if the army produces goods or delivers construction projects at a lower cost, there's no way to ensure that profits made are pumped back into the economy. Money is taken out of the monetary cycle.

Private businesses have to compete with military industries that do not have to pay labour, taxes, customs, and transportation, and have no difficulty finding foreign currency to conclude their deals with partners abroad. This arrangement certainly doesn't consider long-term, economic growth.

Egypt's hope lies in the ability to challenge political, economic, and social policies. Egypt must prioritise the country's interests rather than a few individuals who enjoy impunity or corrupt rewards.

To find hope, trust in the process and leadership must be restored. Opportunities must be afforded to clever, competent decision makers. In actionable, concrete terms, hope lies in a parliament comprised of fairly elected representatives of the people willing to challenge the government, in the immediate release of all political prisoners (estimated to be in the tens of thousands), in repealing the flawed Protest Law, in ending the targeting of civil society so that it is vibrant and able to call out abuse of power, and in abiding by the Constitution to call into account all extrajudicial decisions and actions taken by state officials.

These steps are where hope lies in the short term to instill trust, and in order to stand a chance, there's more. The army must gradually distance itself from its hegemonic role in the economy and allow for businesses to operate within a fair and healthy market. There must also be a commitment from the government to end brutal police practices and devise an organisational restructure with meaningful oversight. The judiciary must end punitive rulings that serve the regime.

Egypt's youth, its most important resource and symbol for its future, are targeted instead of embraced. Many are defamed, imprisoned, disappeared, and sidelined. Instead of engaging with youth, the regime opted for a flashy youth conference held in Sharm El-Sheikh. The conference was insulting to many as it attempts to window dress systematic abuses against Egyptian youth each day. A more realistic youth conference would have been held in jails where many politically enlightened youth are being held. At this more legitimate youth conference, we would have witnessed Egypt's forcibly disappeared youth reappear and go home with their families.

Empty rhetoric and obstinacy is the regime's alternative to meaningful change. False promises for a better future only entrench Egypt deeper into its failing trajectory. Egypt's hope lies in investing in youth and accountability; hopes that Egypt's trajectory miraculously changes without real reforms are lies.
Posted by Wael Eskandar at 3:39 PM No comments: