A Vice In Disguise

There is a huge contrast between Egyptians and Saudis that struck me with much irony just as I was about to depart Riyadh airport. It is no secret that the Saudi Arabian notion of virtue is one where free will hardly exists, that is to say, you should be good because your choices are limited. It is a kind of enforced virtue like that of a child who is well behaved only because he is chained and gagged. If we are to call things by their true names, it is just a hypocritical appearance of virtue which is in fact not virtue at all. The repercussions of this veiled vice are numerous, one of many being that the absence of choice leaves one unable to choose when choices appear and the time comes to make a decision. That is why Saudis when given a choice, their desire to experience something of their own choosing leads them only to the things they were never allowed to choose. It is an overwhelming desire for the forbidden fruit, which is not just the vice they were forced to stay away from, but in this case the power to choose. The desire for this kind of freedom to choose is so much more powerful than their conditioning.

It strikes me as almost futile to point out the ills of the Saudi system, for it would take too many words to state what is obvious to the average thinker and yet despite the simplicity can end up meaning to those who cannot see.

There exist within Egypt such poor thinking individuals who are mostly working class people who have lived in the gulf for some time. Escaping an unjust, tyrannical and poor Egypt, they travelled to the gulf in order to make a living. Many in desperation have adapted to the gulf manner of seeing virtue, as something that must be enforced. They have managed to acquire a foolish lesson that even the Saudi residents have had too much good sense not to learn and not to preach. Saudi residents are not too keen on spreading their way of life to other countries. When in foreign countries they embrace the freedom these countries allow to the extent of abuse.

In their blinded conditioning, Egyptians try to bring in the vice of hypocritical virtue camouflaged as piety into their country. In a way they don’t fully realize the full extent of the harm they would cause if they were to succeed. To comply with their desire of enforcing a narrow minded perceived goodness would be to take away any real goodness that Egyptians might possess through the power of their choice. In trying to fix they actually destroy.

To enforce this notion of goodness would be to force our youth to follow all the wrong paths when given a choice, would diminish their feeling responsibility for their actions more than it already is, would take away accountability and would deprive them of any learning opportunity they might come across. Worst of all, it deprives them of the pleasure experienced when one chooses to do good as opposed to being forced to doing it.
This is why I’m against insincere virtue, for it is volatile and can’t stand the test of real hardships. I’m aware of the counter point that might be raised, namely our need to prevent harm resulting from other people’s bad choices. This is absolutely valid, but how much protection do people need?
The problem is that gulf wahabi ideas are dogmatic without having much intent. It is not a matter of stopping harm; it’s a matter of stopping choice. Perhaps that’s why even with the choices Arabs might have they don’t choose well. They buy a phone every few months and stuff their garages with all the cars they can amass. They follow the golden rule, when in doubt, choose everything.
While Saudis try to escape the vices of their system by accepting freedom they find in other places, Egyptians are trying to introduce an evil into their own world by rejecting the real virtue we had in our country. Sadly those wolves dressed in sheep’s clothing are contributing to the deterioration of real virtue and replacing it with the ugliest of all vices, hypocrisy. Freedom, the greatest of human ideas which is one of the few universally accepted causes to fight for, is being replaced by the most debasing of ideas ever known to man, slavery.
Posted by Wael Eskandar at 2:43 PM No comments: 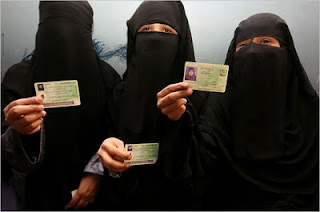 So is it possible to accept the niqab under the umbrella of human rights and freedom? I’d be a fool to pretend that we could if we are to be honest with ourselves. Under the umbrella of extremism it is possible whether it be religious or pretentious human rights. However, it’s impossible to integrate with an alien watching from behind a screen interpreting my every expression and keeping his to himself. The whole quality of human interaction is compromised much less human rights. So the question becomes are we ready for humans to give up on their humanity?
Posted by Wael Eskandar at 10:43 PM 6 comments:

It's simple, if we assume people usually choose between extremes, they can choose between not believing almost anything they're told, and believing almost everything they're told. While both extremes are horrible there is a rationale behind each of them, an empirical formula that can help you decide which to choose. When you don't believe everything, judging by the ratio of lies to truth, you can be right about a the thousand lies you reject and wrong about the single truth you reject along the way. When you believe everything, you're wrong about lies and correct about the truth.
The alternative is simple, either be right about all lies you reject and risk rejecting the few truths that come across your way, or risk being wrong about all the lies you accept and be certain of truths you accept.
In a way those who don't dare believe anything cannot take the risk and for this, they are rewarded of not being wrong most of the time, but the real question is, does truth deserve the risk? If we don't dare to reach the truth, what should we dare for?
Posted by Wael Eskandar at 9:58 PM 1 comment:

Is it worth it to answer a question honestly if the answer won't be enough? I'm really wondering about this now. If you know that someone's looking for an answer that isn't true, do you tell them the truth anyway or save yourself the hassle and not give an answer.
The problem with answering truthfully is that you're effectively a liar if you don't provide the answer that someone is looking for. The problem with not answering is that you're held at fault without a chance to explain something that might make a difference.
At first I thought it was best to answer, but now I don't think it's worth my breath.
Posted by Wael Eskandar at 2:39 PM 1 comment:

A Prison Inside Out

Riyadh is a city that doesn't inspire, but it doesn't inhibit inspiration. It has its own way of making me see things. I go to work 7 days a week. I wake up at 8 to have a car pass by at 8:30 even on weekends. It makes life tough since I don't get this release at the end of the week. It makes Riyadh seem to me like a giant prison. Even without that prison car, it's a giant prison. It's not so much like Egypt, where everyone is watching you, where your freedom is inhibited by those staring eyes. It's a kind of modern day prison where you're allowed to do everything within the confines of that prison. Why does it feel that way? Is it because of the absence of alcohol and women? Though these appear to be important aspects of life, specially the female sex, yet the reason can't be this shallow.


I think it's the fact that rules are imposed, whatever they may be. And how is that different to the rest of the world? Maybe it's just that the values differ from place to place. I think at the end of the day it's the fact that these values are being enforced, and I find them meaningless and stupid. The difference between one country and the next is the degree of freedom to do what you wish, is it the degree of freedom to do what's wrong? Perhaps, but one man's wrong is another man's right. It's the certainty, that fake certainty that disturbs me the most. The air of unquestioning ideas and values.


I find this land skewed, different from what I see in other countries. In other countries, the outside is freedom and the in confines of walls and fences dwells imprisonment. But in Saudi Arabia, the outside is the giant prison, and if you manage to escape to the confines of an American compound then inside what you get is freedom. Maybe like peace, freedom also comes from within. Maybe you might find freedom within a prison of some sort. That might be the general explanation to explain this anomaly.


In compounds people act freely, there are women, there are drinks, there are pools, there is everything you may wish to find in a free society. Is Cairo a lot like Riyadh? I don't know, there's a prison within Cairo.. people, families, reputations and doormen.
Posted by Wael Eskandar at 1:17 PM 1 comment: