An account of what I understood has happened after a visit to the village of Sharbat, in the area of El Nahda in Amreyya, on the outskirts of Alexandria, where the decision to evict eight Coptic families after the burning of their homes and their stores stirred much controversy. 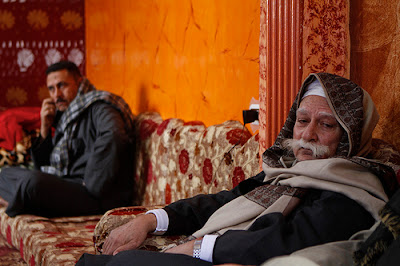 Prologue
On the way to Amreyya with my friends Sarah and Noov, we were stopped by a young police officer who searched the car incessantly for drugs. The young officer was typical. He was wearing a purple T-shirt , dark glasses and the gun in its holster were bulging out of his side. He asked me the usual questions as to what my work was and whether they were my friends and what we were doing.

He then leaned to me and said almost in a whisper, “Do you have any illegal substances?”

He said it in a tone of such secrecy that he gave me the impression it wasn’t to arrest me. I carelessly answered, “No, I do not.”

He kept feeling up my pockets from the top of the clothes and not all of them at that. I was surprised that he hadn’t asked me to empty my pockets. He asked me again if I was sure, and I again said I was sure.  Before he moved on, he said with what sounded like disappointment, “So you don’t do illegal substances.”

He then went up to Sarah and said, “Where are you from? You’re not Egyptian.”

Sarah burst at him, “You’ve seen my ID card, is it not Egyptian?”

“What do you do for a living?”

“I’m a journalist,” she said with an impatient voice and an annoyed grin.

The officer was taken aback by her hostility and quickly said in a low and perplexed voice, “Let them go.”


The Village
The small village of Sharbat is a little before the end of the world. It’s so secluded that I could not help thinking it’s forgotten enough that anything can happen. This is a place so remote from whatever law we have left in this lawless country. It’s a land so forgotten that we become aware of its existence every so often when something horrible takes place, but normal atrocities go by unnoticed.

As soon as civilization ended, the flood of Al Noor’s party name and logo began. Beards were longer and women’s facial skin became rarer. Donkeys and carts shared the road with old cars, pick-ups and toktoks.

The eviction of eight Coptic families from the village of Sharbat started as most stories of this kind do, with a man and a woman. A Christian tailor named Mourad Samy Gerges was rumored to have been with a Muslim woman and took explicit images of her. By the looks of things, this woman was well known in the village but it also seems that no one had seen these videos.

Mourad was summoned by the police and kept overnight. The police found no evidence of the scandalous videos rumored to have been on his mobile. The account of what happened the next day is when the story becomes complicated.

Abskharon also known as Abu Suleiman is the most prominent Copt in the village. He has four sons and owns numerous shops in the village. He was asked what the villagers should do with Mourad. He absolved himself of responsibility towards the tailor. He was assured by an ex NDP local councilor by the name of Essam Mussolini that his property will be protected if he closes his shops. Abu Suleiman and his sons reluctantly closed his shops and they were attacked and looted.

The reason the shops were attacked is unclear. The villagers are said to have gathered around Mourad’s house even though he was in police custody. We know that Abou Suleiman’s youngest son Louis fired from his balcony in the air. There is some discrepancy as to why he fired.

Mourad’s house is a stone throw away from Abu Suleiman’s house. Some witnesses at the scene have claimed that Louis fired to disperse protesters gathered at Mourad’s house. But if the numbers are anywhere near as large as what witnesses we talked to claim, they would have flooded the area enough to spill over near Abu Suleiman’s house. According to Suleiman, the eldest sibling, Louis fired birdshot when people gathered round their house and threatened to do to their women as Mourad did to the woman in question.

Witnesses say that firing the shotgun from his balcony was what stirred the crowds. To confuse matters more, one of the mob, armed with an automatic machine gun unable to control the gun ended up injuring three of those surrounding Abu Suleiman’s house, one of them critically.

The mob attacked the houses of Abu Suleiman and his family, broke into the shops located at the lower level of the residence, looted the merchandise and set fire to their buildings. Mohamed Galal, one of the few brave moderate residents who stood up for Abu Suliman during the attacks on his houses and managed to get them to safety at his residence just outside the village where they are currently staying.

Many questions arise. Why was Abu Suleiman asked about Mourad’s fate? Why did people gather around Mourad’s house even though he was in custody? Why was Abu Suleiman and his sons asked to close their shops? Why were they not protected despite the promise from prominent figure Essam Mussolini? Why did the mob have automatic machine guns? Why would Louis fire had the mob not reached his house? Why were all Abu Suleiman’s properties and shops attacked at the same time? Why would the villagers threaten Abu Suleiman’s family despite not having anything to do with Mourad?

Mohamed Galal suspects that there is a sectarian element that was used. Abu Suleiman had bought a piece of land and started building a community center. He suspects the villagers fearing it would soon be a church were motivated to make these attacks on his family, but we can never know for certain.

Moussolini’s situation is precarious. Other than having a treacherous name, he involved Abu Suleiman’s family needlessly and insisted they shut down their shops.

The Salafi Sheikh Sherif El Hawary in charge of reconciliation admits the mob might have comprised thugs not motivated by any religious purpose who may have been hired. But who would hire these thugs and to what end? Who has the connections and the power to hire these thugs? By the testimony of his neighbors, everyone loved Abu Suleiman.

A local committee of seven, headed by Essam Mussolini and others said to represent the village deemed it unsafe for Abu Suleiman and his sons to stay in the village. Abu Suleiman and his family, already away from the city were asked not to return not because of Shari’a but for fear over their safety. The Salafi Sheikh Sherif El Hawary promised to protect Abu Suleiman using his Salafi men in the area, yet it feels that the Salafis are not what worry Abu Suleiman. Many people opposed solutions proposed by Salafis presented as Sharia’s verdict. Their property was to be auctioned off. Needless to say, Mourad’s family would be evicted. The Muslim woman would stay. Despite Muslim Brotherhood MPs attending some of the meetings, they were not part of the ‘reconciliatory hearings’ as per @ikhwanweb.

As local media began covering the events, there was more pressure against the expulsion of Copts. The Salafis charged with handling cases through ‘reconciliatory councils’ welcomed back the families and promised compensation for the damages.

The latest reconciliatory hearing was held on Thursday 16 February 2012, this time by the governor of Alexandria, numerous MPs and officials. The new reconciliatory committee reversed the decision regarding Abu Suleiman and the rest of his family. How and when they will return home will yet be decided. Compensations were not clear with the new committee.

Epilogue
It feels that the story is long enough without a prologue and epilogue, but I feel I must comment on the entire incident. The prologue is part of the story, and the title for this entire story is the absence of the law. Even when the legitimate bodies, the governor, the MPs and officials were visiting, they created  reconciliatory committee. It’s just like the officer who stopped us and searched us and asked about illegal substances in soft whisper.

This is not a sectarian issue, this is a state issue. The absence of the law or even a chance at getting any sort of justice is at the heart of the matter. There may have been sectarian sentiments, but this is a story of an event mostly motivated either by envy or greed.  Even if we were to consider whether this story is about honor, we discover that it wasn’t. This is a story of shame. These are people who react to shame not honor, they would not move an inch for a woman part stripped in Tahrir square and they are people not shamed by the coward of an army which did that. They are shamed when they realize they do not have control over their women.

These remote areas are completely controlled by Salafi sheikhs. On the other hand they are leveled out by those who can hire thugs.  The sheikh was not brought in to solve this issue exceptionally. The sheikh has a long list of ‘cases’ like a judge in a courtroom, trying to fix things for everyone based on his judgment and interpretation of religion. Some Copts come to him to solve their problems in this land of lawlessness and he may be as merciful or as brutal as he chooses to be, and the police will have no power over him in his jurisdiction.

We may never know what motivated such attacks or what the real dynamics were but such places fill me with hopelessness. On the phone with Adel Abskharon, another son of Abu Suleiman, he was told “congratulations” for being allowed to return to his home. His voice was filled with joy for having escaped a cruel injustice. He was happy for the chance to rebuild his burnt down home and restock his looted store. He felt grateful to be given a part of what is his and that injustice did not extend beyond this. It feels that we’re all starting to feel this way. Once upon a time not so long ago we were seeking justice, now we’re happy to evade injustice. We celebrate whenever injustices are partially reversed, with our hopes back to being grounded into expecting no justice at all.

Abercrombie Fitch Online are very special clothes. You will certainly get to find Ed hardy clothes that will fit you perfectly. The Abercrombie Fitch Sale for everyone, Vibram Fivefingersthey just look amazing and they also come at a discount price.Cheap Ed Hardy Shoes, each of them has the Ed Hardy signature on the front of the shirt and in some T-shirts, you will get to find it on the back too. There are designs that are popular and a lot of women are buying these Christian Louboutin Boots featuring it. These designs are called the "Love Kills Slowly", "Beautiful ghost" and "Tiger". If you wear Ed hardy clothing, you will surely get to be noticed around and looks amazing.Louis Vuitton Sale