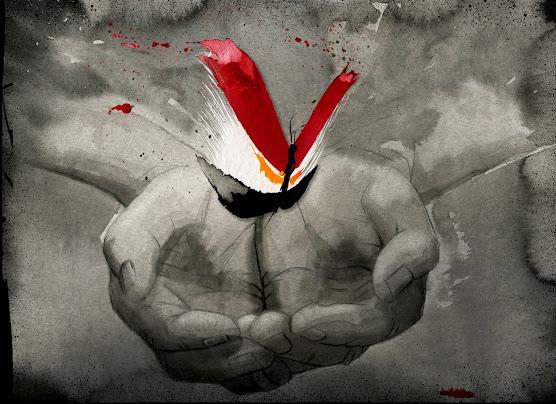 With every passing anniversary, on the 25th of January, we try and remember a day that shook the world, a day where young people lead a defiance of years of apathy and depoliticization as well as a brutal police apparatus to try and dream of a better future.

The act of remembering is often a snapshot. After all, many other things that have happened in the world since then. So each year, there’s a snapshot of politics, economy, the fine young revolutionaries being thrown in and out of jail after a great many of them were killed. The state of police, judiciary and military.

It is often difficult to remember or even imagine that the plethora of images of Tahrir square filled with people numerous days during the active revolutionary years are actually comprised of individuals, each with their own story. The big picture is often seen in an aerial photo, a hastily written article to meet the publishing deadline or a human rights report that details victims and abuses by the state. Yet outside these bulletins, the lives of these people that contributed to the mosaic-like photos continue and for the most part remain under reported. But there is no real reason to report these untold stories. Those living these stories know them and don’t need them reported and the bigger picture remains clear with every human rights report and every arms sale and business transaction between the west and Egypt’s government.

Yet there is value in remembering that the large mosaic image of the revolution and its defeat is made up of countless tiles of humans who put their lives and futures on the line, many of whom still exist despite the disappearance of the Egyptian revolution. They still form a mosaic image, but one that is not captured in an aerial image or a news report. The image is far less visible than the collection that once gathered in Tahrir, in fact, it’s hardly an image, it’s faint dots dispersed all over the globe, barely audible, yet the sound they sometimes tells a story; of the rise of hope, the euphoria of revolution and the survival following its defeat.

Often times using the term mosaic is a cliché, but in this case, perhaps it’s adequate to think of the people who have been a part of the revolution as shattered glass. Each of them unique, colored and sharpened by their experiences and yet shattered. The picture they paint is that of defeat and groups of them share some of the same attributes, some of the same colors, some of the same flavors of escape.

From a distance, you may look at those who have stopped their politics, trying to get by with ordinary jobs, jobs that come directly in contact with the military, who have turned business in Egypt into a monopsony, a term used to describe an economy where there is only one client, where the armed forces is the only client.  There are others who sought refuge in studying abroad, or finding work there. Others have taken various different routes to survive.

I would not paint a picture based on these clusters, but rather on where they are mentally with processing this experience. How can we understand where they’re at? It’s unfortunate that there is no outlet for this sort of study or information, but you can see it in the stories of people you’ve known for a long time, on their presence or absence on social media, on the quality of content they post, in their travels and in what topics they choose to engage with. To those of us living the aftermath of the revolution’s defeat, it’s clear simply by looking at ourselves in the mirror or at those we’ve known along the years. To an outside observer the changes would be simply observed at the moment of their observation if they’re not doing so over time.

Still there are pockets where you can find some of that story, if you look closely enough. One such reflection of this ongoing story was a podcast that has been narrowly circulated in 2019 called Mesh Masmou, which means not heard.

In this podcast, we follow some of the voices from before the revolution, into their experiences and then finally into how they processed some of it and where they’re off to next. All of this is discussed on an abstract mental level, without the details you would find in a feature article, with some sort poster child.

That mosaic audio is one of a shattered revolution, like a Rubik’s cube gone into complete disarray, a far cry from the image painted by an overflooded Tahrir square.

Collectively we struggle, we fall and grow. At every point in my personal journey through dealing with the revolution, I’ve seen others who are going through something similar. We can still relate even though there is no longer a common place to meet, or even a shared goal to achieve. The places we keep remain in our minds and in our memory but more importantly in our journey.

Paradoxically the revolution had given us all a glimpse of what we could be and then took it all away. It allowed ordinary people to rise to the ranks of creative heroes, knowledgeable experts with a fame mostly on merit. They rose against the will of those in power. When the revolution was quashed, they were targeted to vanish from the public sphere. Countless talented people had no choice but to withdraw to obscurity or an even more dumbed down version of their former self. The only way to survive is to return to building once again from scratch. Many of those who stayed on in Egypt have realized that success under these circumstances is not within reach. Silence alone does not suffice. Compliance along with moderately positive statements about Egypt is not enough. There is only room for the talentless, the opportunists, the hypocrites.

It is a time where people are bearing the brunt of poor economic policies throughout the years, and even some of the staunchest supporters of the Egyptian state have realized the economic catastrophe. But the people have already been divided and there is nothing new for old revolutionaries who have seen this coming from the start. The fear is that the greatest of dreams have turned into cynicism and in a sense, that would be the true defeat.

Everything is boiling beneath the surface, but that surface is fortified and no one knows how solid or brittle it is in the face of the unknown, unseen, unheard quantities suffering beneath it.