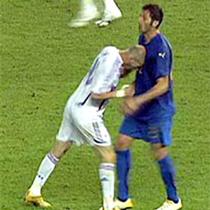 I do not play football to be head-butted or insulted.

Yes I play football, and I enjoy the game but lately the game has turned into something else. At first it was about kicking the ball with your legs from place to place, in the old games you can feel a sense of caution with the players, the main object in the game was the ball. Then came more contact, the object became the opponent rather than the ball, skills valued less, fouls much more and the threshold for a foul was raised to very high standards such that a foul was given only if a player was assaulted, not just pushed or pulled. A foul meant the player had to fall face first to the ground. And then came psychological warfare, the game was a competition not only of skills but of nerves as well. Words were perfect for this psychological aspect of the game because you can say as much as you want to any other player and get away with it, of course this didn’t apply to the all so powerful referee. Then came violence without the presence of a ball, which was just plainly absurd but was allowed as long as you can get away with it.

The game has changed. The fact is that the game developed more than its guiding rules. With such weak rules to guide the game, the idea is now to get away with what you can. There’s chaos on the pitch and with only one referee to enforce an already flimsy set of rules, the whole game becomes a street fight, and the loser is the one who gets caught.

Let’s remember that it’s just a game, and professional or not I think I have rights while playing the game, but the real question is what are those rights and who will enforce them? I have the right not to be insulted during a game, I mean after all words can be very hurtful. I recall there things said by a man regarding the holocaust that sent him to jail. Words are very powerful, but what you say and when determines their power. I also have a right not to be pinched, punched or head butted. I mean this is a right of any human being.

I think that any sport should have these rules enforced really, I mean who said it’s more sportsmanly to insult players and less to head-butt them. In the case of football, I think the FIFA protects my right not to be head-butted, but it does not protect my right not to be insulted. Furthermore, the chances are you’ll be head-butted once during a game, but insulted all through-out. I don’t deny of course that you can be pinched, pushed and punched all throughout the game, given that no one sees it being done to you, but it’s all a matter of whether or not you’re caught.

Some say that words shouldn’t matter and that insults shouldn’t be taken seriously, but I’ve always thought that sports was about clean competition, ethics and fair play. It doesn’t really matter if some people think that insults and assaults are okay to bear because sports by tradition should be against this. I don’t think that I should suffer the assault of a head-butt or an insult during a game. But the funny thing is that some sports are violent, allowing for punches and kicks. I’ve yet to hear of a sport that endorses insults.