I never saw how protests could work to bring about change. I never thought they were an effective way of getting what you wanted. I always did, however, believe in protesting. In an effort to practice my beliefs I went to protest the brutal killing of Khaled Said on the hands of Egyptian police informers. I went there with the aim of expressing something I believed in and came out finding out something expressed to me by the bullies in control. I realized how frustrating it was to be in a protest. 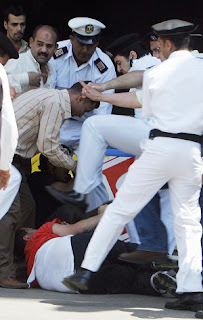 The reasons for which I thought protests were not of much use was because I thought chanting won’t help fix things and no one wanted to listen anyway. This remains true to a great extent but there’s something deeper to it.

I was always hesitant to go to protests. A great part of it was because I didn’t believe in much of what they said and most of what was taking place in them. They were full of aggression for my taste, but if I am to be honest there’s something else that held me back. It was a fear, hidden deep, always known and never confronted. I say this now having rid myself of it, yet many still unknowingly hold it. It is the major fear that takes hold of clever, educated and well paid adults which impedes them from going to protests.

To clear something up, the reason I decided to go was because I thought the cold blooded murder of a young man by those sworn to protect us was well worth objecting to. It was something that outweighed any fear, ideas or opinions that I held. It was a cause worth fighting for even if expression will prove to yourself what you believe rather than bring about change. It was something worth more than posting a link on facebook. It was action. I expected a weak apology and a lousy investigation at the very least. Instead, I was faced with the hurtful arms and words of bullies claiming to be the police.

When I told my highly paid educated friends about protesting for the reasons that supersede all others they felt that this too was futile. What I realize now is that this refusal to object to reality was an escape from it. We want a sense of false security telling us that we’re different, that we’re human. We already had that sense of self worth going into our fancy office buildings and talking about huge amounts of money and about cutting edge technology.

People who are in good positions feel important, respected and human. All this was just an illusion. It was a part for them to play given by authorities because if they came down to protest, all that self worth will be knocked off the pedestal. If they were to object to what the bullies said or did, they would cease to have that importance, they would be no more than the servant or doorman they look down upon. They would be demoted to filth that is dusted off a police animal’s shoe.

*Welcome to where time stands still
No one leaves and no one will
Moon is full, never seems to change
Just labeled mentally deranged

In a protest they would not be able to talk to bullies as men or women of certain standing in society. Imagine a person stopping police abuse by saying, ‘Stop, I’m a doctor’, or ‘Stop, I’m an engineer,’ or a marketing director, or an architect or a manager or a CEO. These bullies don’t care. You’re worth nothing if you’re not important to their superiors. “Go back to your illusions,” they’d say, “or we’ll pull you into reality.”

Dream the same thing every night
I see our freedom in my sight
No locked doors, no windows barred
No things to make my brain seem scarred

This is the true threat lurking about people’s sub consciousness. That is the true fear that people have these days: to wake up from their dream, their illusion of power and control. So many take the government’s side in an attempt to maintain that self worth, and many pretend to fear the beatings and the arrests, but what they really fear is coming face to face with their worth.

Build my fear of what's out there
Cannot breathe the open air
Whisper things into my brain
Assuring me that I'm insane
They think our heads are in their hands
But violent use brings violent plans
Keep him tied, it makes him well
He's getting better, can't you tell?

Either way, if you haven’t faced the music then you’re filled with this fear. No need to feel ashamed, it’s a legitimate fear. I too am sedated by my travel to various countries and my work on ‘important’ projects. It’s easy to escape when things can seem to look good for you.

No more can they keep us in
Listen, damn it, we will win
They see it right, they see it well
But they think this saves us from our hell

In a truer form of reality we’re worth more than the bullies want us to think, but they have the keys to our chains. We’re in a sanitarium inside a giant prison. They keep us locked in, living out our delusions while they guard the gate. If we try to escape the sanitarium and our delusions, they show us the real prison. The sanitarium is a much happier place; it’s a much easier place. I guess the fear we have is to wake up and realize that we’re captured prisoners.

Well done Will!! At last, how refreshing to know that some Masries have actually reflected and admitted that they are slaves to the fake bubble they live in. And that unfortunatley, Masr is not as 'great' as some might think, and no matter what level of social status you are, or have acquired through education, self-knowledge or even by dare I say it, money-the truth is:you don't mean jack to the authorities if you get in the way of their interests. It is a sad sad sad state of affairs, but this is why I find it difficult to even visit Masr these days, the idea that people voluntarly chose to ignore their shortcomings, and come face-to-face with their inadequacies and address these issues that affect not just the masses, but each individual. Allah yerham Khaled, his blood is not just on the hands of those who murdered him, but on our hands for staying slient, and letting these criminals get away with it.

That was good Will, as always.
but i have nothing to say and sadly nothing to do ...

Well said, this article touched me. thanks for writing/sharing it

Anon 1 no one thinks masr is great, even today we're afraid of Nasser's time when no one was allowed to speak.

"All that is necessary for the triumph of evil is that good men do nothing."

But what if all the good men are afraid? Can fear and goodness coexist?

Anon 2, the article was heartfelt, so I'm glad you felt it.