For the State of Denial, I Recommend a Shrink

"Denial is a defense mechanism postulated by Sigmund Freud, in which a person is faced with a fact that is too uncomfortable to accept and rejects it instead, insisting that it is not true despite what may be overwhelming evidence."
~Wikipedia
The naivety of those standing up for the army is infuriating. I know such words may be offensive to some, but ignorance is offensive to me. I’m not talking about ignorance of the facts, no one knows everything. I mean ignorance of how to interpret these facts. 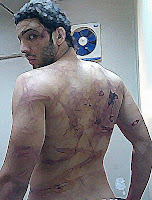 Photo: Singer Ramy Essam's tortured back (distorted)
Why is it that Egyptians are so adamant about protecting the army? The facts don’t indicate the army’s loyalty is towards people. Are we expected to simply applaud the army for not wiping out innocent civilians? That’s all they did really. You may say it’s a big thing, but they had no choice in the matter. They do not believe in our cause. Following that order would have meant the collapse of the country but more importantly of the army itself. It is unlikely that soldiers would have been able to carry out orders like these especially when the demands were undisputedly just. Soldiers are not trained to murder unarmed civilians of another nation, much less their countrymen. Is it really worth saluting someone for not being a cold blooded murderer? Or were our expectations of them so low?
The real test was when the army took over. But what did the army do when it took over? They only promised to uphold Mubarak’s promises. What else did they do? Nothing. Lots of propaganda and nothing more. They allowed some of those who were corrupt to be tried, but they were scapegoats rather than a real quest for justice. The army, in fact, is building a shameful history of protecting many of the corrupt figures. They have not been a force to realize the demands of the revolution, if anything, they insist on hindering them every day. In short, they’ve assumed dictatorship.
Dictatorship can only be allowed temporarily if only to fulfill our demands and give us our rights. So far, none of that that has happened. On the contrary, the army protected thugs, allowed the shooting of Christian protesters, unlawfully arrested citizens, artists, journalists and human rights observers. It practiced torture that we set out to abolish and generally exercised a great deal of injustice.
I can back up every accusation, but it doesn’t matter because there’s a psychological impediment to people believing the most compelling of evidence. To believe that the army is an oppressive tyrant would be a pathway to hopelessness. There are a few reasons that the army presents obstacles that seem too monumental to overcome. One is that the army is powerful. Even though people have taken down one tyrant, the police, they feel that it would be difficult to take on the army in a similar manner. (I’m not saying that we should.) The other reason is that it would be psychologically catastrophic to realize that no institution in Egypt upholds justice.
Even the classist rich elite need that sense of justice. They would sooner believe that asking for what’s yours is illegal than believe that it’s your right and you will be punished for it.
There are three types of coping mechanisms:
Simple denial: not believing that anything actually happened.
Minimization: admitting the fact but not its seriousness through rationalization.
Projection: admitting the fact and its seriousness but not the responsibility.
The body of evidence is overwhelming, but I’ve seen all the various forms of coping, especially rationalization amidst the educated. These reasons make it futile to convince those in denial of the army’s actions. According to Anna Freud, denial is a mechanism of the immature mind, because it conflicts with the ability to learn from and cope with reality.
Personally, I recommend a shrink.
Posted by Wael Eskandar at 2:57 PM

paranoia, revisionist thinking, OCD should also be addressed during the session.