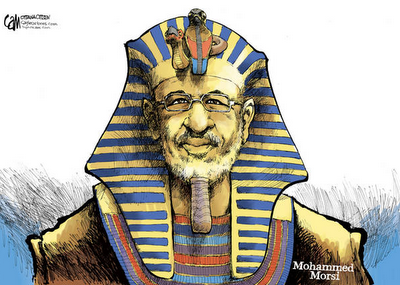 Morsi's decrees are not confusing at all. It's a power grab and any suggestion they’re to fix corruption is ill informed. Here's why. With all these powers, Morsi could have stopped police brutality on Mohmamed Mahmoud instantly and yet continues to push the rhetoric that the protesters there are hired thugs. Even if he believed that to be true, police needs reform and that is the one thing everyone is certain of. The absence of police reform indicates taking over the police in its current form which serves corrupt political leadership irrespective of the law.

The same holds true for judiciary reform, because even with the general prosecutor changed, it does not guarantee that judiciary will be fair or independent. Many of the verdicts will continue to be politically driven but more likely to benefit the current regime. Bear in mind that the new public prosecutor is related to Ahmed Mekky, the minister of justice who has already shown bias towards the Brotherhood’s plans of maintaining the status quo.

The general prosecutor himself being hired by the president will be loyal to the president, and if he is not, he can face charges as soon as the president replaces him. Removing the corrupt Abdel Meguid Mahmoud removed a corrupt man and entrenched a corrupt system.

Reality is that the fixing corruption is an excuse for those who do not want to believe that Morsi granting himself absolute powers is the first step of a complete takeover of the state. The most evident sign will be never putting Tantawi or Anan on real trial.

Posted by Wael Eskandar at 3:04 PM