What Rabaa has Come to Symbolize

‘The Rabaa symbol has come to symbolize peaceful resistance,’ someone once wrote me. These words could not have been further from the truth. 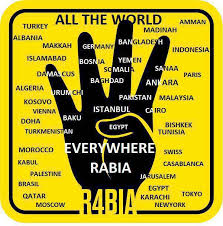 I’ve come to think what Rabaa has come to symbolized for me. It symbolizes Muslim Brotherhood supporters, it symbolizes everything I’m not. They are supporters whose voices were heard throughout the past two and a half years. Their voices, however, were not calling for democracy, justice or freedom but to condemn our stance against the military, support military trials, support injustices when carried out by the military or the Muslim Brotherhood.

It’s not that Rabaa wasn’t yet another brutal atrocity green lighted by the army and executed by the police. It’s the reaction of the supporters of the sit-in who once again chose to distort the truth. The trouble with Rabaa supporters is that they’re either lying to us or propagating lies they believe to be true.
The MB narrative is simple enough. Everyone conspired against Morsi from day one, and in the end the army moved to remove him. This narrative is straight forward enough for the simple minded but observing one of Morsi’s many authoritative actions is enough to dispel it. If Morsi did not control the police why did they target his opponents? If Morsi favoured justice, why did his own Minister of Justice lie to protect the police? If Morsi was a democrat, how did he manage to alienate the many voices that supported him before he became president?
It’s impossible to highlight all the lies in the Rabaa narrative. But maybe some examples relating to the events might help. Never mind mounting evidence of torture in the camps, there is the assumption there were no armed elements within the protest. Firearms were used in Rabaa and Nahda. To use a similar phrase to their dethroned leader, use of firearms and peaceful don’t mix.
There are many more omissions that make the narrative deceitful and dishonest. The Rabaa sit-in even started from before the ‘coup’ while Morsi was in power. It was started through orders from the Muslim Brotherhood leaders with no specific purpose except perhaps to counteract the mobilization for June 30.
The rallies were always pro Morsi, even from before he was deposed. It is a hard sell to say that it turned into pro democracy rallies, particularly with evidence to point that the change in rhetoric was prompted.
The rallies have always been sectarian, at times claiming there were Christians who joined their ranks, but simultaneously calling out ‘Islameya, Islameya’. The signs all turned from Arabic to English to cater to a western audience that was angered by Morsi’s ouster, yet the violent and sectarian messages in Arabic were lost in translation. There are far too many examples of facts that discredit the entire MB narrative, but in the end, it’s not the individual lies but the attitude of malicious distortion that the Rabaa icon has come to symbolize.
There is no attempt to vilify those supporting Rabaa or those who were present or those who died. Many were unarmed and did not deserve to die. Many were indeed kind people, who are likable in person. There is no reason why they should be villains to stand for something I’m against.
There is also no attempt to lump them into one homogeneous group. There are those who knew why they were there, some who didn’t. There were some who were there despite the hardships of the sit-in and those who were there because these hardships were better than their life back in their homes. There were some who knew there were weapons in the sit-in and many others who did not. There were some who knew the risks and some who did not.
Overall, people were there for different reasons and hence those that died, died for different reasons, not just the MB. Some died out of necessity of being there, some died for the MB, some died thinking they were protecting legitimacy and others died thinking they were protecting Islam. In the end, they were sacrificed by MB leadership and they were sacrificed by the army. In the end, the reasons they have died are not those I believe in, there’s no honour in dying that way because the reasons do not reflect my values.
They are people who have chosen loyalty to individuals or groups, with a pretence of values but no real commitment to them. That is the true symbol of Rabaa, loyalty to a group irrespective of the group’s moral actions. The Rabaa supporters were among those vocal enough to applaud for Morsi while threatening to use military trials. They were vocal enough to support the army part stripping a woman in Tahrir. They were vocal enough to support a constitution that cemented military trials against civilians. They were vocal enough to support a limiting protest law. 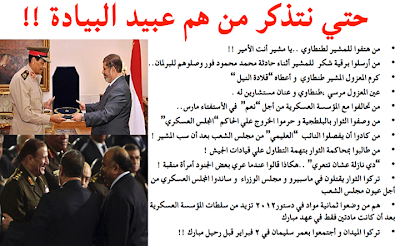 All the chants they’re chanting now, we’ve chanted before. All their stances against the military, we’ve taken before. But here’s the worse part, all the responses they’re hearing today objecting to their stances, they’ve said before. As we were chanting for bread, freedom and social justice they chanted, ‘Field Marshal [Tantawi], you’re the prince’ (Ya moshir, enta el amir) They have been the main actors providing political cover to injustice and oppression.
They were vocal when they were the oppressors but in favour of the oppressor not the oppressed. The only reason they are speaking up now is because the harm is befalling them. They were in a position to serve justice and yet they only see injustice when it is directed at them. That is what the Rabaa icon symbolizes, a myopic vision that will only speak against injustice when applied to them. The Rabaa icon symbolizes that it’s okay to target my enemies but not me.
So when I think about calling Rabaa a symbol of peaceful resistance, I’m perplexed. There was nothing peaceful about throwing your opponents off the roof, there was nothing peaceful about incitement to burn churches across governorates. It’s not called resistance if you welcome brutality when it happens to others and resist it when it happens to you.
Posted by Wael Eskandar at 3:10 PM

I wrote "An embattled Egypt" http://azzasedky.typepad.com/egypt/2013/08/egyptian-battered-and-embattled.html on August 15, 2013 right after Rabaa was dispersed>
I wish there was another way to get out of this mess, but there wasn't. I just hope that the MB don't continue to push their followers to stand in the face of death and retribution

Agree with most of what you say. But to me, Rabaa symbolises yet another massacre by the army against (mostly) peaceful protestors, and I say mostly because there were claims that a fraction of people have had weapons, no proof though. We criticise their bendy values but refuse to take their side when they're the ones under attack. Their values are distorted, but what about ours?

You're a strong writer. Some of what you say is accurate but much of it isn't. I'm bothering to say this because you seem like a person with morals and I respect that.

I know many people living in Egypt who signed Tamarod and went out on 30/6. After seeing what the army did after 30/6 though, they joined the Rabaa demos, whereas previously they'd been strongly against it. The reason behind Rabaa did change. Before Morsi's overthrow, it was support for Morsi (they said it was "anti-violence" but chants were all basically pro-Morsi). Afterwards, however, it was resistance of the Military and the refusal of the brutality the military was using and what they were doing.

Also, I was in Egypt for some of the early part of this summer and I checked out both Rabaa and Tahrir and a couple in Alexandria as well. The night I was in Rabaa, I did see Copts there, and I did see many that were not MB. The majority of the people I spoke with said they were there against the army and not pro-Morsi, some said they were pro-legitimacy.

As I said, I agree with some of what you say, but it truly pains me that you would see Rabaa as NOT being a positive symbol. I personally consider Rabaa a symbol of solidarity against the violence of the Military, the killings, the destruction of homes, and the list goes on.
You're assuming all Rabaa bearers are MB, but I assure you that is not the case.