A Referendum Caught Between Supporters and Traitors 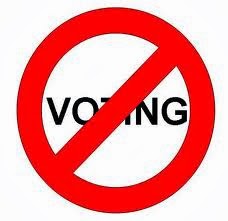 A referendum is meant to be a vote by the public whereby they can freely express their position on a certain political matter, but what is the point of a referendum when you’re only allowed to “freely” express one position but not the other?

Enough has been said about the referendum to understand that it was never a vote on the constitution. The document itself is flawed as pointed out even by extremely biased state influenced media. The rhetoric used to urge voters to accept the constitution interprets the referendum as a means to legitimise their existence through means other than mass protests. It marks the desire of the regime to end street politics that are difficult to control, into the more easily containable ballot box.

A great majority of voters were transparent as to why they voted Yes. It was simply a way to emphasise their rejection of the Muslim Brotherhood and close the chapter. Other reasons branching from this general sentiment are the desire for stability, gratitude for General Abdel Fatah Al-Sisi and military intervention, approval of the roadmap and so forth.

These reasons are not to be undermined. That there is a great sentiment of resentment against the Muslim Brotherhood within Egyptian society is undoubted; however, questions arise as to whether the path chosen actually achieves the goals perceived by those who approved it.

The real question is whether the government, bent on selling lies to the public, is actually taking the Yes vote as a means to achieve what people think it does. Was the regime asking a question to its citizens through the referendum or sending out an answer?

The government sent out every possible message that Yes was the only acceptable answer to the referendum. The defamation of potential actors who disapprove of the fore-drawn path combined with state security crackdowns on both Islamists and their independent opposition sent out a message that dissent is not tolerated. Public personalities queued up to echo state rhetoric, media did not allow opposition voices and the streets were flooded with expensive advertisements both direct and subliminal to guide people into participating with a Yes vote.

This unnecessary oversell had adverse effects on some people who grew suspicious as they would of a salesperson overly insistent on selling a product they already thought was good. But perhaps the most damaging of all measures is the arrest of activists campaigning for the No vote in the referendum (that along with ridiculous incidents, such as the arrest of a voter who wrote “No to Military Trials of Civilians” on the ballot box). It is a message from the regime in the strongest possible sense that this is the same kind of faux democracy under Mubarak, where democratic procedures were allowed but not democratic participation. Choice would be allowed in theory and eliminated in practice.

It is not likely that the majority of the voting block sees the crackdown on No campaigners as necessary or even beneficial.  They probably see it as a needless, stupid act that is inconsequential to the results (and rightly so). But it is exactly because such campaigning would not have changed the outcome that there is a fundamental problem and that these arrests cast a biggest shadow on the legitimacy of the referendum. A democracy is measured by the strength of the opposition, but in Egypt there is no opposition, only supporters and traitors.

While people see this act as entirely unnecessary, it is possible to speculate that the current regime doesn’t. These acts, along with a referendum, are meant to establish order. A government needs people to obey and dissidents to fear, and what better means other than enforcing that which the majority has already agree to. The referendum holds a different promise to the regime than it does to people, the promise that people will accept what they’re told through media, songs, posters, threats and punishment, if necessary. After all, governments have no reason to exist unless they govern, and in Egypt’s case, its governance has meant it can mandate what people should think.

In my assessment, impunity for the regime was implicitly voted for along with some of the people’s aspirations. The real concern, however, is that state impunity and oppression will strengthen opposition against it. In the long run, this may even strengthen the Brotherhood once again, who can be regarded as the most powerful organised alternative in the ranks of the opposition if sufficient numbers survive this crackdown. The results don’t seem to help avert this path either. A medium turn out, with an approval percentage of nearly 98%, reminiscent of Egypt’s oppressive past will make it seem that a boycott may have worked at least within the ranks of the Muslim Brotherhood, even if it isn’t true.

The regime can avert this path by living up to people’s expectations, both those announced, such as moving towards a new democratic legitimate post Morsi state, and unannounced, such as better livelihoods. Otherwise, people, disappointed in how their vote is turned into something that it’s not, will eventually rise up against those who fooled them.

As history looks back at this referendum, the climate in which it is remembered may look like that of an authoritarian rule backed by popular support (depending on how we move forward). A crackdown without due process of political opponents to the regime, arrest of activists who dared to campaign for a No vote, no party that supported a No vote in the referendum, a rhetoric that accused those in disagreement of treason, a climate that terrorised political opponents, both Muslim Brotherhood members and secular opposition, an environment where protesting against the state was practically prohibited through a protest law controlled by a police force diligently proving its corruption, a complacent judiciary and the absence of accountability for any state crime.