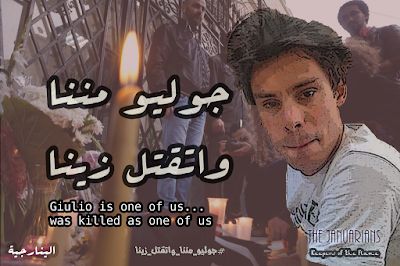 In a recent speech, Sisi finally confessed that taking down the Russian plane was a breech in Egyptian security and an act perpetrated by extremists. In the same breath he alluded to the murder of Giulio Regeni as a similar act, hence fortifying whatever predisposition loyal Egyptians had that he was killed by Islamists to frame the Egyptian regime.

The first murder of a Morsi supporter following the July 3 military takeover was caught on tape outside the Republican Guard headquarters on 5 July when the army shot and killed three pro Morsi protesters. I did not want to believe we had so quickly descended into the same violence and brutality we had fought so vehemently against under Mubarak, SCAF and Mohamed Morsi. That first kill meant a complete return to SCAF days where the military was rampant, vicious and as always, unaccountable. In utter disbelief and in the hopes of averting reality, I rushed to examine the evidence, I saw a few videos showing the shooting, from different angles, along with photos of the poor man's head which had been shot.

No sooner had the young man been shot and media circulated social media, conspiracy theories started to appear to salvage the narrative that things have not descended into the same old crimes and impunity. I remember being dragged into these theories in the remote hopes that they would pan out and we would not have to once again confront the military's crimes. Please let it be something else, please let it be something else I thought to myself.

Duly like an apologist, I began to examine the pictures, the videos and the testimonies. I looked at theories that postulated that it they were Muslim Brotherhood supporters who shot themselves in order to frame the military. It seems so silly now, but I had to treat it seriously, maybe it would offer salvation. The evidence pointed to a black car in the background passing at the exact same moment he was shot. There were also photos of his head with a small wound entering, and the back of the head blown off, indicating, by those theorists, that he had been shot from the back.

I entertained all these ideas and posted them and got into discussions. I may have even ignored Jeremy Bowen's testimony regarding that incident which he witnessed in order to give these conspiracies the benefit of the doubt. While some people responded to me by saying, “How could you?”others were very objective and dispelled all these lunacies. Exit wounds were larger than entry wounds, both angles show that the soldier shot him, there was no evidence that the black car fired any shots and more than that, the military was armed, accustomed to killing and it made no sense for protesters to kill their own instead of military personnel.

From that day onwards I toyed around with theories to explore them but was never able to dedicate that much attention or give them credence as much as I did the first time. The rest of the kills were about sometimes entertaining ideas of how justified they could have been, but never buying into it.

The Rabaa massacre was the price paid by Egyptians who entertained conspiracy theories and found justifications for the regime as they continued to kill innocent people with impunity. Many are not even aware of how monumental that price is till today and continue to argue there was no other way.

Five years into the revolution, a wider base of opposition was created thanks to the uprising in 2011, but that sheer number lead to more brutality against the growing number of dissidents. Crimes against humanity are as widespread as never before, forced disappearances, torture,.. With every escalating brutality comes its own set of conspiracies and justifications. The simple harsh reality of brutal criminal security forces in itself too brutal to handle in the minds of many.

This brings us to the brutal killing of Italian student Giulio Regeni who was kidnapped on January 25 and tortured to death with cigarette burns, stab wounds, broken ribs and signs of electrocution all over his body. The act is seemingly unprecedented, although a Frenchman was killed by the police in September 2013. Yet the disappearance the brutality and the manner with which it happened has only been customary with Egyptians, never with a foreigner.

The fact that it is seemingly unprecedented was enough for many who cannot deal with this as an escalation in brutality as another conspiracy theory. It must have been the Islamists that kidnapped young Giulio, tortured him exactly like the Egyptian police and dumped his body to implicate the police, who would, sure, do this to an Egyptian, but never in a hundred years would they do this to a foreigner. That is the rhetoric and the main reasoning, despite the army killing eight Mexican tourists, which they would claim is different because it was an accident.

It wasn't the media campaign and pressure from the Italian government that caused authorities to dump the body, no it was a perfectly timed plan by Islamists. To feed into this convenient conspiracy theory, a security affiliated newspaper, Youm 7, purposefully mistranslated security forces to Muslim Brotherhood from an Italian paper that postulated that Regeni could have been killed by a rival security agency to undermine Sisi. In another strange twist, another Italian paper reported on the mistranslated Youm 7 article that claimed it was the Muslim Brotherhood who killed Regeni. To make matters worse, an Italian paper noted that eyewitnesses in the NY Times piece who described how Giulio Regeni was taken by plain clothed policemen were not consistent in terms of timing with what they had found on Giulio Regeni's messages which indicated he was able to text 2 hours after the alleged arrest by authorities.

This to them seems like a golden opportunity to discount not just the eyewitnesses but the three security sources cited in the NYT piece indicating that Giulio was in police custody before his death.

There are many benefits and motivations of having Islamists kill Regeni instead of the regime. It would confirm the bias that Islamists are an absolute evil, it would offer hope that while Egyptian police do this to Egyptians, there is still hope they are responsible enough not to do this to foreigners. But in reality, many also understand that the police would never own up if they had done this and the international implications if they did would be huge, and would mean that this is indeed a criminal regime that is far too brutal and ugly to carry the country forward.

It is fear of confronting such a reality that drives some to believe that it isn't the police, although I'm very certain many know deep down inside, just like I did when I examined the first murder, that Egyptian security forces the most likely culprits of this heinous crime. It doesn't even matter that the Ministry of Interior sent out instructions in a periodic secret memo, shortly after Giulio's murder, not to take action against foreigners without informing state security and the ministry of interior.

Denial is an endless river in Egypt, and it is surprising what you can find if you're looking for it and how easy it is to ignore reality.
Posted by Wael Eskandar at 8:33 PM