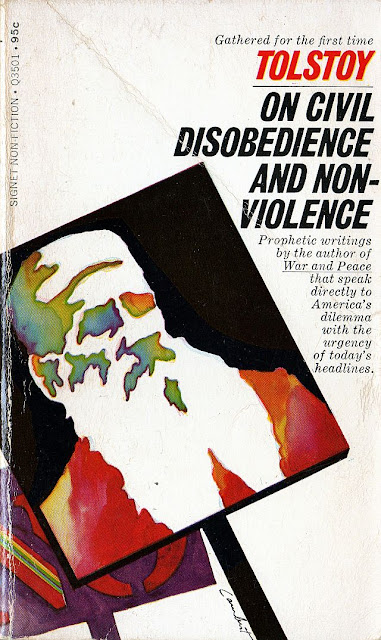 From Leo Tolstoy:
This year, 1896, a young man by the name of Van-der-Veer was summoned in Holland to enter the National Guard.
To the summons of the commander, Van-der-Veer replied in the following letter:
THOU SHALT NOT KILL
Mr. Herman SnijdersCommander of the National Guard of the Middelburg Circuit
Dear Sir:Last week I received a document in which I was commanded to appear in the magistracy in order to be enlisted according to the law in the National Guard. As you, no doubt, have noticed, I did not appear. The purpose of this letter is to inform you frankly, and without any ambiguities, that I have no intention of appearing before the commission. I know full well that I subject myself to a heavy responsibility, that you can punish me, and that you will not fail to make use of that right. But that does not frighten me. The reasons that compel me to manifest this passive resistance present to me a sufficiently important counterbalance to this responsibility.
I, who am not a Christian, understand the commandment that is standing at the head of this letter better than the majority of Christians. It is a commandment inherent in human nature and in reason. When I was still a child, I permitted myself to be instructed in the soldier’s trade — the art of killing — but now I refuse.
More than anything else, I do not wish to kill on command without any personal impulse or foundation. This appears to my conscience as murder. Can you name to me anything more degrading for a human being than the commission of similar murders or slaughter? I cannot kill an animal, or see it killed, and therefore I became a vegetarian. In the present case I may be commanded to shoot men who have never done me any harm. Soldiers certainly do not study the military field manual in order to shoot at leaves on the branches of trees.
But you will perhaps tell me that the National Guard must also and above everything else cooperate in the maintenance of internal order.
Mr. Commander, if there really existed any order in our society, if the social organism were indeed sound, if there did not exist such crying misuses in our social relations, if it were not permitted that one man should starve to death while another enjoys all the lusts of luxury, then you would see me in the first ranks of the defenders of this order. But I unconditionally refuse to cooperate in the maintenance of the present so-called order. What is the use, Mr. Commander, of pulling the wool over each other’s eyes? Both of us know full well what is meant by the maintenance of this order. It is the support of the rich against the poor workers who are beginning to become conscious of their right. Did you not see the part that your National Guard played during the last strike in Rotterdam?
Without any reason, this guard was compelled for hours to protect the property of the business firms that were threatened. Can you for a moment suppose that I will surrender myself to take part in the defense of men who, according to my sincere conviction, are supporting the war between capital and labor, or that I will shoot at the working men who are acting entirely within the limits of their rights?
You cannot be so blind as that! Why complicate matters? Indeed, I cannot have myself cut out into an obedient National Guardsman such as you wish to have and as you need!
On the basis of all these reasons, but especially because I despise murder on command, I refuse to serve in the capacity of a member of the National Guard, and ask you to send me neither uniform nor weapons, since I have the steadfast intention of not using them.
I greet you, Mr. Commander,
I. K. Van-der-Veer
Posted by Wael Eskandar at 11:45 PM