When I first watched the ‘Avatar’ trailer I thought the movie would be a complete disaster and that I wouldn’t enjoy it one bit for a variety of reasons. For starters, the name Avatar sounds like some geeky internet word that can’t be taken seriously. The blue cartoon like creatures didn’t help either and only served to remind me that the last time James Cameron made a movie was in ’97 with Titanic. Sure it was the most successful movie ever made from a box office point of view but I didn’t care very much for it. Visions of a movie stuck in the nineties with old concepts flashed through my head, not to mention a cliché plot. The trailer told me all I needed to know about the story. A sort of teched-up version of Dances with Wolves meets Pocahontas.
Having watched Avatar in 3D, everything changed. Perhaps it was because this is my first time to watch something in 3D and have nothing to compare it with but I truly doubt that. The verdict is that Avatar is a movie that’s worth watching in 3D. (In 2D it wasn’t as impressive, which I simulated by watching with one eye closed through the 3D glasses) The first hour was an introduction to a colorful brightly lit new world in three dimensions and Cameron took his time drawing out the details of the new world with meticulous precision and fantastical imagery. The reason why it was very enjoyable and entertaining extends to more than the beautifully crafted scenery. James Cameron did a fine job transporting us to the planet Pandora surpassing so many of his predecessors that have attempted to take us to their own worlds. The creatures lived up to their name of having been created masterfully on the screen. It was as if we were looking into a glass box where everything was happening live before us, into a luminous exotic forest that was out of this world.
That’s not to say that the movie’s story line was profound or original. In a way it did mimic Dances with Wolves and Pocahontas in that the modern humans intermingled with an alien culture and one of us fell in love with one of them, but not in a cheap manner. The characters were taken seriously and Cameron took the trouble to write up their scenes from scratch rather than rely on ripped recycled scenes from previous movies (ala 2012). The movie itself is not a mindless action flick of action and sci-fi clichés and that’s was what won me over. The themes were not of the American patriotism and supremacy for a change; on the contrary they were quite the opposite which is rare to find in American blockbusters. It had some socio-political themes entwined with green and nature. 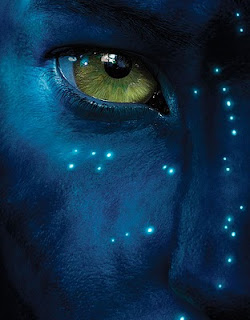 The aliens were not alien in their values and their ideas, they had a deep connection with their forest and every living thing around them. Their tribes worked in harmony, the women and men equally vital to their community with deep respect for the greater force of nature that binds them all. In a way the Navis of Avatar resembled the native Americans whom the Americans slaughtered, whose lands were stolen in order to serve the great and sinister ideal of capitalism. The Americans resembled, well, hmm, Americans and even in a futuristic movie on other planets they haven’t changed their locust-like nature of devouring everything in their way. The businessmen causing wars and milking us dry won’t stop.

In this movie it’s like the true alien to the humans is humanity. We’ve become so alienated from our roots that we don’t recognize them when we see them. We destroy everything in our way for insignificant profit and we've distanced ourselves from what truly matters. We’ve severed our connections with our surroundings, our nature, our climate, our environment and what’s more with one another. As a story, even with all the repetition in the ideas presented, everything is as pertinent as ever. The natives or Navis are referred to as hostiles and the American are still using the phrase ‘fight terror with terror’ even though they’re the aggressors.

The sky people (humans) moved back to their dying planet; something along these lines was said. We have killed our planet, but worst of all we’ve let our greedy politicians and businessmen do it, but unlike the movie we don’t have the power to tell them they can’t have everything they want, we have to watch our own planet being depleted for ink on paper they call money and for luxurious polluting vehicles and machinery.

The mandatory action sequences were there, but beneath their usual shallowness, I was filled with an underlying sorrow to see that beautiful scenery that Cameron had built being destroyed by heinous gun fire and explosives. It’s sad to see something beautiful destroyed, and Cameron created something very beautiful.

Those I’ve been with hadn’t experienced 3D in the manner presented to us in the film and according to many reports, Cameron revolutionized 3D. Cameron aimed to bring people back to attending movies in the cinemas. In my view, he succeeded.

Posted by Wael Eskandar at 6:50 PM

Email ThisBlogThis!Share to TwitterShare to FacebookShare to Pinterest
Labels: film

very good review.
Everything I thought of the movie. But I couldn't have explained it the way you have :)