First Editions can be Dangerous

Serbia made it to the world cup. In celebration of their victory the Serbian president Boris Tadic celebrated by opening a bottle of champagne and proposing a toast. Apparently it is illegal to consume alcohol in sports venues and so the president was fined.
When I heard the news, it made me really sad to think that even in such an event the president could be accountable for his actions when breaking the law. Needless to say, it's sad because of our current situation.
In contrast, our government has done something quite ridiculous, this same piece of news was published in Al Ahram newspaper's first edition (see below). 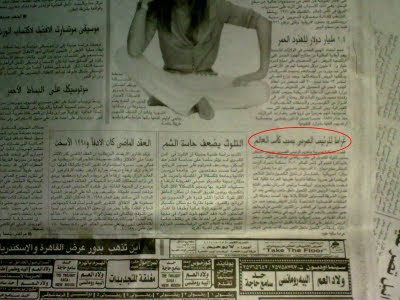 In the second edition, this piece of news was removed (see below) 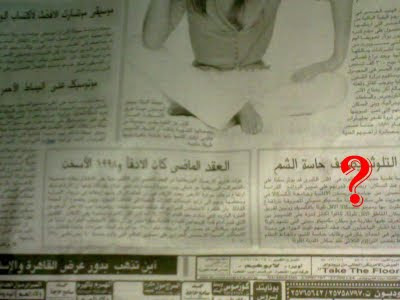 Is there someone in charge of looking at all these first editions and removing any threat to the presidency and the government? Why would they remove such a piece of news? It's already known that our president is above the law. What does the removal of this piece of news say about our own government? I think it just means they're afraid and that it must not be ingrained in the minds of Egyptians that the law applies to the president. It's almost funny that there's someone with enough power to influence a newspaper going through silly pieces of news to identify threats to national security.
The act of removing news items and images in the second print is a common practice, which means that all newspapers are closely monitored and that there is great interference in what is published. Instead of all that energy to monitor the news, why doesn't the government do the multitude of jobs where there is obvious dereliction?
The bottom line is to watch out for first editions and enjoyEgyptian lunacy...
Posted by Wael Eskandar at 11:19 AM

hehe this is so funny

btw this doesn't count as me calling you

and check this out: http://nermineamer.blogspot.com/2009/12/history-of-auc-theatre-radio.html

it's so much better isn't it?

I just don't want to forget

doesn't count? how about texting and emailing?

The one thing I don't like about it is the constant music in the background. It's okay at first but then it's too consistent.

Good sound quality and editing, but I found yours more interesting, it related more to the outside world..

And on a slightly different note related to this blog post, I should get into the habit of buying the first and second editions and finding the seven differences..

no e-mails, no texting

and you should do that... it would give you something to laugh about every morning

you r gonna love this!
http://egyptianchronicles.blogspot.com/2009/12/let-sun-shine-in.html

yeah I read about this, but I have no explanation for it.. there are bigger forces at work.