Egyptian Police: A Manner of Treason 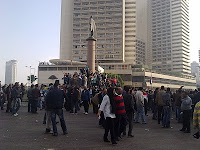 A group of people hopeless due to an oppressive government that decided their services were not required stumbled upon something quite extraordinary: hope.

The vibrant youth that walked in the first protests on January 25th were not thinking of all the hardships that such a positive move brings. They only thought hope was afloat and so they must act. They acted responsibly, peacefully, exercising much restraint despite the mountain of repression within. The consequences were the whole nation’s to bear.

Following the violent attacks from the police on January 28, matters escalated and between the hours of 5 and 6 pm, as army units arrived to the scene cheered on by protesters, the police disappeared. All the police from all of the governments in every post were gone and were not to be heard of for the remainder of the night. In the heat of the moment, protesters celebrated the victory over their archrival, but something else happened that night. Organized mobs looted and burned shops, attacked police stations, freed prisoners, took weaponry, terrorized neighborhoods and attacked houses. Naively we believed that to be a price to pay for the successful uprising as all revolutions or uprisings had their share.

The army declared a curfew, and we did not understand why at the time. The following day, the same militia seemed relentless, looting and terrorizing. The act of thousands changed the lives of millions. The same young men with many more took upon themselves the responsibility of seeing this through.

As media covered the catastrophe of how Egypt, one of the safest countries in the world was turned into a den of thieves, people called upon the army to help in a panicked frenzy. They, in turn, called upon their youth who were never needed before to protect their neighborhoods. The young men took to the streets and set up local checkpoints with roadblocks to keep the streets safe. They were armed in sticks, stones or knives, anything they can get their hands on while the perpetrators possibly had guns. Bravely they stood their ground in the face of a danger they did not set out to bring upon themselves that very first Tuesday they marched out.

Interestingly, those left in such a vulnerable position commended the youth of January 25 and never complained as to the state they were in. The people had accepted these brave hopeful young people of as representatives to their cause. More than that, they were proud of them despite their fear.

The young men took it upon themselves to bring down the perpetrators. Thugs were caught and much to everyone’s surprise some were found to be from the police force.

It came as shocking news to some that the police had betrayed Egypt in such a manner, but to most of the young people who went out to protest it came as no surprise. The police had always betrayed Egypt’s trust as of late, so what if the manner of treason was so blatant this time around? It was one of the reasons that triggered all these protests.

The government media denied all allegations against the police and vindicated them, but now, accusations were out in the open. The police betrayed everyone including those defending them. Every news anchor and every news writer that attacked the protesters and defended the police was in jeopardy and now it was those protesters falsely accused that were protecting them.

As the police continue in their treason, people continue to defend their homes. Even valiant officers who were given indefinite leave from the force join the ranks of people and help defend the neighborhoods as citizens. The police failed the people but more than that it failed policemen.

I left tonight to try and keep my streets safe not knowing what would happen if we met with armed gunmen. I met many from my neighborhood whom I had never seen before. We talked and found ourselves united in our grievances. Having been guilty of being amongst those who partook in the protests I asked those who had not participated if it was worth it. Despite the bitter cold and the lack of sleep, there were no complaints. Everyone knew that we had to set out to change the way things are and that we had to win back our dignity somehow.

I write this now as the usual thugs employed in every protest, in every electoral rig, in every bullying feat storm the streets of Egypt. They set out to unleash chaos in every governorate in a methodological manner. Fear is in the air as bullets are heard across the capital and other cities, but so is hope and pride as young people protect the streets. A sense of calm is present as the army commits to protecting its citizens against those cancerous cells.

They don’t have a chance, because we know what we’re fighting for.

We’re winning but we’ve got lots more to go. We’re winning because for the first time, we’re all proud of one another, for being given the opportunity to live up to a responsibility. These are difficult times, but they are also very moving. The same people who did not care to make a stand earlier deeming things hopeless are now making a stand. The same people who had nothing but fears, broke those barrier and face more dangers. We’re winning because youth who were given no choice but oppression are trying to break free, paying a heavy price set by their oppressors and trying to buy themselves back.

Posted by Wael Eskandar at 2:44 PM