Are Elections Free and Fair?

I mentioned earlier that these parliamentary elections were illegitimate. All that led us to these elections has been illegitimate and in any case, the upcoming parliament will be crippled. The parliament has no constitutional powers and will end up either being impotent or an arm of the SCAF. 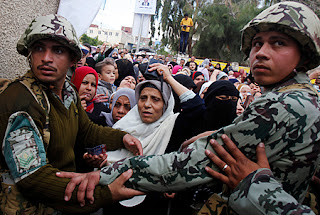 (Photo: Mohamed Abd El-Ghany / Reuters)
The true catastrophe isn’t that they’re not legitimate but that even if they were, they would not be free and fair. There are many reasons why the current elections violate the criteria for ‘free and fair’. I will try pointing out a few.

Media Bias
No fair elections can take place with a corrupt media that solely serves regime interests. This means that the regime will always interfere in what is available to the public and the media will be mobilized by the regime’s covert deals. This means elections are not free since some parties are targeted and not fair since some are ignored.

Instability
When the police force is at the full force of its brutality just before elections, it creates an atmosphere that is not conducive to elections. Yet at the same time, this brutal police force kept the peace just for elections to take place.

Election Laws
Egyptians were never consulted as to how elections should be carried out. The decisions were always dictated by the SCAF. It is ironic that the laws that should bring about respect for the people disregarded and in some cases disrespected people’s will.
The laws themselves have been disrespected. A party like El Nour should not have been allowed to form because no parties based on religion should have been formed. That one party should be exempted is not fair.

Distribution of Districts
On what basis was the distribution of districts? Analyst have attributed this to the SCAF’s bias that some parties win. Even state owned Akhbar Al Youm’s Mohamed Omar pointed out that these districts were to appease the Islamists.

Foreign Funding
There is a limit to how much should be spent on a campaign that clearly has not been observed. There is a lot of funding from Saudi Arabia and from Qatar to fund the Muslim Brotherhood and the Salafis. When hundreds of millions of dollars are poured into campaigns the chances of fair elections are not that high. Such funding is not looked into at all while all funding to NGOs for example is strictly monitored. Such double standards tear down the concept of fairness completely.

Lack of Information + Campaigning Outside Poll Stations
Each of these alone is enough to cast doubt on fairness. The lack of information means that the elections mean nothing. How can one choose a representative when they don’t know their choices? The lack of information combined with campaigning outside the poll stations is probably the most monumental problem with these elections, particularly with the 500 LE fine.

Fraud and Violations
Although it looks like a landslide victory that doesn’t change the result, the truth is far from it. Contrary to some opinions a few thousand votes could change the results in the list system.  The violations are an indication to the kind of elections Egypt is undertaking. The results are secondary.

Military Trials
This may seem inconsequential, but when 12,000 people are tried by military courts mostly protesters, and when activists are targeted by the regime, the elections become neither free nor fair. It’s not only that the votes of those in prison have been detracted, but to insist that activists are harassed means chopping off an arm to alternate media and movements that could have been working on campaigning for elections. While we fight for those imprisoned, tortured and killed, other parties campaign for a place in an illegitimate parliament.

***
There is a rebuttal for every one of these reasons. They are things like, this happens everywhere, this will not affect the final result, this is an exaggeration, etc… They can all be valid, but they’re very weak because they will be in denial of the true environment in which these elections are being held. We are being ruled by an illegitimate body that has disrespected our votes in a referendum earlier. No fairness exists in this body; no freedom is possible under this body.