In All Cases, the State of Emergency

“In all cases, the announcement of a state of emergency will be for a limited time period not exceeding 6 months,” so says article 59 of the provisional constitution. ‘In all cases’, that’s a very powerful phrase and it’s not a mistranslation either. It did not say in ‘all of the above cases’ or ‘in most cases’ or ‘in all relevant cases’. The absoluteness of this statement is beyond contention. Since this is the constitution we’re plagued with, we must follow this rule. 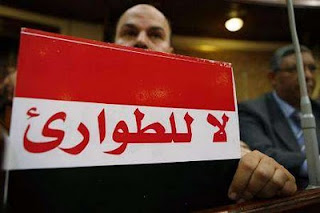 According to Tarek El Bishry, who headed the committee to write the new constitutional declaration, the emergency law has ended on 19 September, 6 months after the referendum.
I personally think it will end on 30 September, 6 months after the adoption of the provisional constitution on 30 March .
In any case, we know that we were in a state of emergency when the SCAF announced that military trials will be ongoing as long as the emergency law is active. That happened even before the events of the Israeli embassy on 9 September and the announcement that the emergency law was necessary.
The SCAF on the other hand, thinks that Mubarak’s declaration of the extension of the emergency law is still valid till June 2012. They are gravely mistaken. Article 62 states "All laws and regulations decided upon before the publication of this Announcement remain valid and implemented; however, it is possible to cancel laws or amend them according to the rules and procedures adopted in this Announcement."

Posted by Wael Eskandar at 1:35 PM