The Mubarak Trial: A Theatrical Review 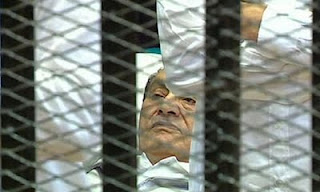 The Mubarak trial, while significant politically must be analyzed by an art critic rather than a political analyst. The spectacle viewed by millions deserves a better review with all the show that’s been put in place for the people. The true nature of the Mubarak trial is that of a stage play and must be evaluated on its theatrical rather than political merits.

Let’s start with the writing. This play has been granted a large amount time for writing. The writing conditions may have been stressful; the protests in May could have attached a sense of urgency, and the 8 July sit-in may have expedited the execution. Yet, this script has been in the kitchen for quite some time so there can be no excuse for the quality of work produced.

The results have not been catastrophic. The script may not be air tight, but was adequate for all intended purposes. The true challenge came with the execution which I dare say, fell below the mark.
That’s not to say that some of the elements of the performance weren’t well executed. The set design, for example, was impeccable. The hall looked like a real court room and the cage within was built with great attention given to the tiniest details such as the spacing between the wires. The costume design was one of the elements to be marveled at. The white track suits were well designed and a perfect fit (at least in one of the episodes). Audio was clear and the picture contained much realism.

Choreography was believable and not forced. Various actors danced their part. However, as any choreographer would tell you, the moves are only half of it, the other half is the dancers themselves. Unfortunately, the dancers were a true disaster.

Besides a few other minor glitches, acting was the real failing in the whole production. Setting aside the fact that the accused was brought in on a stretcher instead of a wheel chair, the deposed president had too much vigor for someone rumored to be in and out of comas all the time. His strong voice gave way, as if he were reluctantly playing the part. He also fidgeted around in his bed too much for someone being brought in on a stretcher. His movements were numerous, impatient and showed signed of strength that should have been absent. He acted more like a healthy child confined to his bed by protective parents, aching to be released from the clutches of his bed and to go outside and play with his friends.
The ex-president’s sons didn’t do a fine job either. Their faces were healthy and smug and their entire appearance was unconvincing. To make matters worse, Alaa, in a moment of improvisation, broke out of character and revealed his true identity by ordering a camera to stop filming with much authority.
Supporting actors did not help either. The execution was not convincing enough. Characters forgot their roles and saluted the prisoners in a gesture that completely betrayed the authenticity of the entire play. On the one hand, one might defend them by claiming they are not professional actors, but on the other hand, it should not be much of an effort for them considering that this is their real job and the role should be executed with ease.
That’s not to say the play was not an overall success, it was and it was viewed by tens of millions who at the very least appreciated the effort and thought put into this production. It is only that these little glitches that deter a viewer from fully being immersed in the drama and makes the whole story less believable. Here are a few things that would have made the production better.
Had the SCAF not been a dictatorship meddling with the judiciary system, the likelihood of believing this was a real trial would have increased greatly. This is compounded with their reluctance to try Mubarak for a very long time and the constant rumors about his ailing health that was once one of the country’s taboos. Had Mubarak been brought in on a wheel chair rather than a stretcher and had he acted the part, the play would have been more believable.
However the gravest of all flaws lies in the script itself which is devoid of any mystery. The way the case has been built, with evidence stacked very poorly against the deposed president gives away the ending. There has been no effort to stack the evidence in a believable manner to create any form of suspense as to how the play will end. The laws of the country have been set up by the perpetrators themselves to give them protection at any time. The SCAF’s refusal to alter any of these laws undermines the entire show. If there is no conviction, the play will extend as long as the crowd is willing to endure.
Posted by Wael Eskandar at 12:49 AM

Brilliant! As simple as it is. But you're the first who treated this circus for what it truly it. I sill have my hope in the people and nothing else. I hope they are only being patient and not bedazzled with the spectacle.