Meet the New Boss: A tale of military extortion

On the way back from Ain Sokhna close to 11 pm on Friday night, 23 September 2011, I was stopped by a group of army personnel. I was in the company of a male Egyptian friend and a female Australian friend (the significance of gender soon to be elucidated). They searched thoroughly through every piece of trash in my mess of a car and came up with an unopened bottle of alcohol kept in a back pack in the trunk of the car. 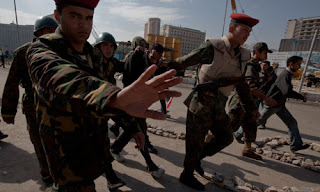 Posted by Wael Eskandar at 3:26 AM

Truly disturbing. Slap me silly -but I seriously wonder if that, what happened, is really meant or whether it had been an act of impertinent abuse of position. I admire your bravery and your courage to take the issue to 'the end'. How unthinkable however would it be, to report this incident to a 'control' authority..that asked: I'm realizing: this doesn't exist yet!?.. #OhEgypt