Fraud in Egypt's Consulate in NY


The video shows a reporter being assaulted while filming the elections in the NY consulate. The Consul General at the NY consulate, Youssef Zada (@ymzada on twitter) is seen to be wary of the journalist and approves the assault and the confiscation of the camera.


This is the consulate’s response after the video was out: 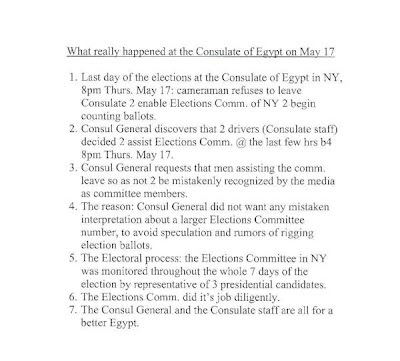 The interesting thing to note is that @ymzada blocked me on twitter when I criticized the fraud. I also criticized the assault which is technically thuggery, something practiced constantly by the Egyptian regime. If @ymzada had not been guilty, an explanation would have been sufficient, but as you can see from the response, it looks like a cover up.

It is important to note that Ahmed Shafik and Amr Moussa won the highest votes in NY.

But what does the video and response mean?

I would imagine that the real fraud happened in counting the votes. Fraud has been committed, I’m only speculating on how.  There are two people who are counting the votes not from the committee who are probably charged with discounting most votes that are not Ahmed Shafik and Amr Moussa. When someone was about to film them, Zada wanted to make sure that the involvement of these unauthorized employees is not uncovered.

The reason I am sure that fraud had been indeed been committed is because I have reports from several reliable sources that they have voted for Khaled Ali in NY yet his results came out zero. The morons doing the rigging did not even include one or two votes. It is important to note that the story of the two men being asked to leave happened after the video was out.

It seems that is when all the rigging will take place, during the count. In the Holland embassy, Shafik came out on top as well. In the Washington DC embassy, Abol Fottouh came out on top, one activist attested that the voting in the DC embassy had been transparent where citizens could monitor and help.

Update: CNN covered this incident and here is the link http://edition.cnn.com/2012/05/24/us/new-york-egypt-consulate/index.html


Update II: A video supporting the theory that there could be state sponsored fraud in favor of Shafik

Posted by Wael Eskandar at 7:46 PM