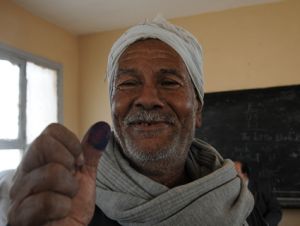 I'm having hard time understanding the statements you make in this post.

You say it is Unfair elections. But it is not clear how you support that. "Democracy has been mistaken for majority rule" is not enough explain how unfair the elections is. Personally, I agree to some level that it maybe unfair. But not just Unfair to minorities; which I think is what you are really going after. I think it is unfair elections because it is held and conducted by unfair and selfishly motivated entity, the SCAF.

But if you think it is unfair to minorities because of majority rule, Then I would say: It is also unfair to ignorant, poor, and silent masses.

Moreover, I don't understand the reason you voted for (versus not voting at all). Is it because you think it is a responsibility? What do you think about elections boycott?

We have a post on Liberal Koshari about Egyptians becoming one single issue voters (for or anti sharia). So, I agree with your post however I don't agree with your opening paragraph "Rule of the majority gives the majority the license to commit immoral acts that disrespect human rights and minority rights, but democracy does not. Real democracy should not allow the election of people who will transform rule into a dictatorship." how do you explain then the rise of Marine Le Pen, right-wing nut, in France (received 17% of the vote in the recent presidential elections) or the Tea Party in the US (they actually won and now a significant force in the Republican party). And there are many examples. I'd say your post is also driven by far from the Islamists, just like voters who voted for Shafik out of fear.
www.liberalkoshari.com

Actually you drive my point even harder. It's not a democracy when nutters take charge. Take for example the rise of the National Socialist party.

There is no room for extremism and nutters in a democracy. My post is driven by morals and my own understanding of democracy and human rights not fears.

You're arguing on the other hand that majority rule = democracy which is completely inaccurate.

Egypt is not a democracy as it is missing many of its elements such as freedom of religion, speech, rule of law, etc but, unless serious violation are reported, the recent presidential elections were "free and fair" in accordance with the 1948 Universal Declaration on Human Rights and the 1966 International Covenant on Civil and Political Rights.

We may not like the candidates or the election result but it was "free and fair".

Actually I'm not mixing them up. I have an entire post dedicated to why elections were not free and fair, I wrote about it previously.

But very quickly, elections under a military dictatorship can never be free and fair.