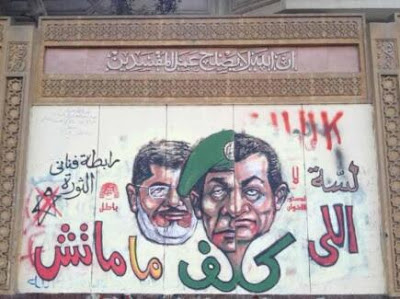 When a democratically elected president ignores the will of the people and quickly takes measures to become a dictator, his legitimacy is abrogated. He himself has rejected democracy and the will of the people that chose him. Therefore, if he insists on rejecting democracy, it is well within people's rights to insist that they be heard or have him removed. They would be protecting legitimacy and democracy not turning against it.

Imagine Ahmed Shafik had issued that constitutional declaration to clean up the country and uphold the values of the revolution. Imagine he had sent in his thugs to disperse a sit-in and assault women. Imagine he had them use teargas, shotguns, pistols and possibly automatic weapons to prevent protesters from returning to their sit-in. Imagine his goons had sexually assaulted a woman they placed under arrest and tortured men before handing them over to the police. Imagine he had written a horribly flawed constitution that infringes on freedoms and cements military privileges in Egypt. Imagine he had honored Tantawi, Anan and Ganzouri and promised the army and police immunity. Imagine 50 school children were killed during his presidency in a train accident. Imagine he had threatened the entire nation that if they do not vote yes, they will have to live with his dictatorship. Imagine in his speeches he accused opposition of wreaking chaos and of being part of a foreign agenda. Imagine he had broken every promise and made new promises you were certain he was not going to keep. Imagine he had been praised by the US and done everything they needed to appease Israel. Imagine he was a puppet controlled by Mubarak or some other force behind him. Imagine he had the right to label whoever disagreed with him a traitor.

Would you still give him a chance to be your dictator? Would you trust him just because you believe him to be a good person? Close your eyes and really imagine, and then talk to me about protecting 'legitimacy'.