The Muslim Brotherhood's Militias in Action: A Firsthand Account

The recent clashes at the Itihadiyya presidential palace leave little room for confusion. A day prior to these events, people took to the streets in Egypt’s largest cities to denounce the manner in which the Muslim Brotherhood-controlled presidency has been running the country. On Wednesday 5 December, everything changed. The Muslim Brotherhood reacted by calling on supporters of President Mohamed Morsi to march to the Itihadiyya palace, where an anti-Morsi sit-in was ongoing. Morsi’s supporters forced protesters out and destroyed their tents. A little past mid-afternoon all the demonstrators were kicked out and replaced by Morsi’s supporters. 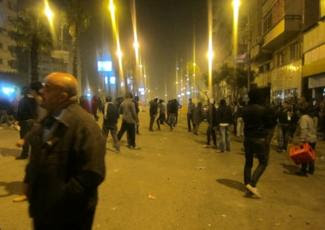 In response, anti-Morsi protesters began moving back to the palace area in order to reestablish their sit-in. They started gathering in small numbers at the corner of al-Khalifa al-Ma’moun and El-Merghany Streets. On El-Merghany and stationed around the palace were Morsi’s supporters. Chants were exchanged between the two groups as they faced-off with no barriers separating them. Around 7:00 pm the first clashes took place. As anti-Morsi protesters marched in an attempt to retake the space wherein the sit-in had been forced out earlier, they chanted loudly, “the people want to bring down the regime.” This is when the first clashes began. The protesters that were charging ahead of me turned around and started stampeding a great distance to the back.

The retreat was unusual. In other protests people would run for a few seconds and then stop. This retreat covered far more distance. The usual calls of “ithbat” (Arabic for “stay put”), which are often yelled when protests experience attacks, did not seem to work. As I recovered from the run, I realized that the Muslim Brotherhood’s supporters were very close. I saw a young protester shaking his head and telling me, “they are using shotguns.” Then it registered that the big bangs I had been hearing were gunshots.

Protesters tried to charge back using what they can of rocks and chanting “Jika” (an activist who was recently killed by security forces in protests around the ministry of interior) and it worked for a few seconds. But then we heard more shotgun rounds fired, and they continued to echo for a great portion of the night. Protesters controlled the intersection for a while, but then the Brotherhood’s supporters pushed them out even farther than last time. It was when we first heard the sounds of an automatic firearm that we were pushed back farthest.

Muslim Brotherhood supporters were attacking using rocks, shotguns, blanks, live ammunition, and teargas. Their push split the crowd into three main fronts, one on each side of three intersections, namely al-Khalifa al-Ma’moun Street, Mansheyet El Bakry Street and Roxy Square. Clashes continued in various places. I moved toward al-Khalifa Al-Ma’moun Street. The clashes continued on all fronts with Brotherhood supporters outnumbering protesters, showing signs of strong organization in their attacks, and possession of superior fire power. The Molotov cocktails prepared by anti-Morsi protesters to counter the weaponry used by Muslim Brotherhood supporters were highly ineffective.

This is not the first time that Brotherhood supporters have clashed with protesters. One clash had taken place when the Muslim Brotherhood members blocked protesters from the parliament area on 31 January 2012. There was also the time when the MB attacked Popular Current activists in Tahrir Square on 12 October 2012 after they chanted against Morsi. However this is the first time we have seen the Muslim Brotherhood resorting to firearms to attack civilians in an organized fashion. This degree of organization, along with the use of arms, makes these supporters akin to a militia that comes to the aide of the president whenever he is threatened politically.

Many protesters were injured with birdshot pellets. Human rights activists who had talked to doctors at Mansheyet El-Bakry hospital told me that two people had died by live bullets.

After a while, the clashes were limited exclusively to El-Merghany Street near the presidential palace. An eyewitness who had been on the other side explained to me that as Muslim Brotherhood supporters pulled back, the CSF formed a line to protect them from protesters. When they had fully retreated, the CSF then went behind them. According to the eyewitness, rumors were spreading among the Muslim Brotherhood’s supporters that the church had sent in people to fight them.

Meanwhile, teargas was fired at anti-Morsi protesters from behind the Brotherhood’s lines. The police were present on the Brotherhood side of the clashes, but not the other.

The show of force, the disregard to opposition and the people, and the strong insistence on monopolizing power are strong indications that Muslim Brotherhood leaders do not intend to lend their ear to anyone but their own.

Throughout the night the sound of live bullets, shotguns and fireworks (by protesters) were heard. Clashes continued late into the night.

First published in Jadaliyya on 5 December 2012


Update, all weapons fired were from Muslim Brotherhood

Posted by Wael Eskandar at 4:08 PM