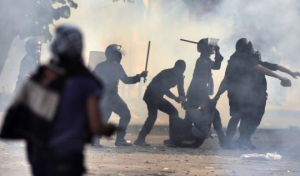 Each passing day Morsi's decisions undermine his leadership and that of his group the Muslim Brotherhood (MB) eating away at their legitimacy. What we're seeing is not really a president but a puppet controlled by the MB Guidance Bureau. At best, what we're seeing is a hesitant incompetent president who does not think his decisions through, always backing down, never listening to his people. Morsi declared a state of emergency in three cities despite earlier promises from him and his group that this will never happen and that the law is enough to deal with whatever problem arises. They are fully aware of how this law can be used to fight political opponents. Morsi declared a curfew which people are not convinced off and he backed down on his decision, like he has done numerous times.

Police are shooting at people indiscriminately, seldom upholding the law, often following illegitimate orders. This is the police of a dictatorship not a democracy. We've seen protesters killed, incredible amounts of tear gas and more than that, a five star hotel being looted right next to where they were stationed. There is no good reason not to believe that the thugs who attacked the Semiramis were not state sponsored.

The public prosecutor is privately owned by the Muslim Brotherhood, never looking into any of their crimes but instead targeting their enemies. Most recently he outlawed 'The Black Bloc' as a terrorist group without any evidence. They released a few youtube videos and have worn masks while attending protests. Worse than that, he asked civilians arrest members of the Black bloc.

The judiciary is corrupt, but what Morsi is doing is taking it over rather than reforming it. A very politicized decision in the Port Said Massacre case, and a speech that asks us to accept the rulings of a court he once accused of corruption.

Freedoms are regressing, with attacks on media in various forms. Early retirement of Hani Shukrallah, editor in chief of Ahram Online, lawsuits against satirical presenter Bassem Youssef  and the targeting of Christians in cases of 'defaming religion' are but small examples to the wider crackdown on freedoms.

Meanwhile, Morsi is securing international relationships in order to cement his rule. What will he do with the funds he secures from the European Union? Spend it on security, tear gas and ammunition?

There are two ways some sort of stability can be achieved, enough oppression or enough justice. Morsi has opted for the former, much like his predecessor. With the state of the people of Egypt it will have to be much more oppression than that practiced by Mubarak. In my mind I have no doubt that Morsi is willing to do what it takes to silence opposition and oppress the people. But the question isn't whether he is willing,  the question is whether he is capable.

Posted by Wael Eskandar at 5:21 PM