Another New Year - All of this is Real 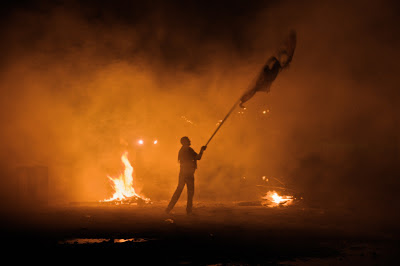 I’ve long been accustomed to writing grim posts on special occasions even from before our special occasions turned grim by nature.  Now all we have are the grim occasions to commemorate rather than celebrate, the death of our fallen heroes or their birthdays. In the past two years, life was on fast forward. Each day brought new calamities and once in a while there were small victories.

Anyway, this post is about the New Year. I’ve long celebrated it with caution, and never more so than this year. My thoughts travel to many different places in the past and in the future. They’re both part of one another and this day does not separate them. This is just an arbitrary point in time to look back at the past and look forward to the future as you ride that wave that turns one into the other.

I have nothing more to say about New Year and its resolutions than I’ve said in the past. I’ve made the ultimate new year’s resolution that everyone does and no one ever keeps. I find that the one thing worth looking into is the past, not to weep over it but to learn from it. Maybe by looking honestly into it, I can help with what’s to come more than all the haughty resolutions few people tend to keep.

The sad things is that the new year caught me at a time when I’m unable to make a formidable assessment.  Am I a better person for all that I’ve seen and all that I’ve stood for? I don’t know. I’m enough of a realist to entertain the notion that perhaps all that has happened has only worn me down. I’m not yet bouncing back and I don’t know anymore if all that has happened will allow me to.

I’ve stared injustice in the face. That’s my obsession now, injustice. I don’t want to see it, but it follows me everywhere. The biggest problem is that it’s systematic. It’s not just isolated cases. I’m living in a country where avoiding it is a fluke. The system is set up so that injustice prevails. That is what’s wearing me down.

I have become a lot more emotional. I’m not one who has much empathises much. In fact, someone once jokingly said I must have ‘blunted affect’. Yet my tears have become closer to my eyes than before. It’s not a movie we’re watching with actors playing heroes, it’s the real deal. It’s the young people brave enough to believe in ideals we’ve encountered in books or movies or deep within ourselves that move me. It’s not a video game and there aren’t always cameras rolling, but I’ve seen people armed with nothing but their ideals and the occasional rock stand up to guns and foreign funded weaponry. I’ve seen faith in freedom fuelling the bodies of young and old through long hard days where hope is elusive. I’ve heard the chants and the flags waving tirelessly in the face of hard hearted criminals that betray their sworn duties.

These are the things that make me cry. All of this is real. This is what they’ve tried to capture in books and films, but we’ve captured it in reality.

Has all this made me a better person? Perhaps not, perhaps it made me a weaker person. I’ve never believed that what doesn’t kill you makes you stronger, maybe it just makes you weaker and wears you down.

I’m not the same person I used to be. I’m a little more irritable, sensitive, argumentative and impatient. I haven’t been able to deal well with my rejections and find my peace because of all that has been happening around me. I long for moments of peace when I can find my old serene self that took me through the many hardships I faced. I feel there’s someone buried deep inside with the power to turn all the bad into good, but I’m gasping for air and cannot find that shore on which to rest and recover before I continue swimming.

These genuine times are more confusing than what we’re told to believe and see. The evil as real as the good. That confrontation with both is taking its toll on me. This is real life, no guarantee that good will prevail over evil. One thing in the fantasy resembles reality though, good is beautiful and evil is ugly. They never capture it well though, the beauty of good people, with all their flaws and imperfections, trying to do right by themselves. And the ugliness of evil people, with their insistence on squandering all their chances, and truly hurting millions around them selfishly.

The goodness seeps inside your bones and moves you to tears. The ugliness clouds your days and enrages you enough to reconsider everything you’ve been told.