A False Sense of Security: The Egyptian Military’s Lost Bet on the Police 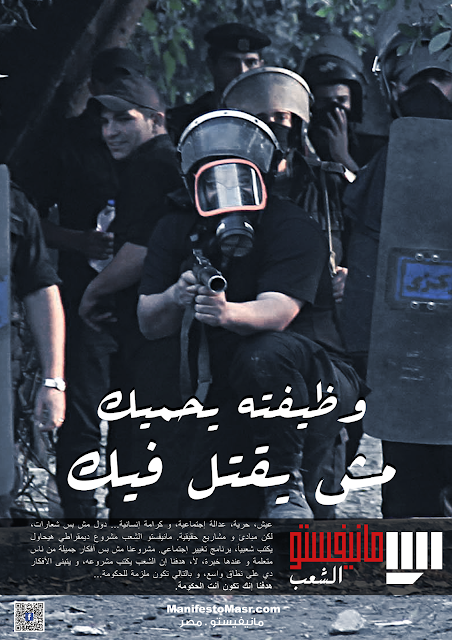 Recently the regime, personified in the entity of the police, lead an attack on Egypt’s activists who opposed the protest law and the military trials of civilians. The attack on 26 November 2013  was brutal, vindictive and lacked professionalism. The police violently assaulted protesters in a manner that violated the law they were implementing and furthermore targeted women through beatings and physical assaults during arrests and while in custody.
The attack on these activists who are greatly related to the January 25 revolution can be simplistically described as an attack on revolutionaries. The attack on a legitimacy already gained by revolutionaries is a move that may cost the regime much if not corrected. At the end of the day, the legitimacy of a regime is determined by its perceived integrity, even when taking extraordinary or unlawful measures. This may explain why unlawful attacks on the Muslim Brotherhood were widely supported and did not negatively impact the regime’s popularity at least among the wider section of the public opposed to the Muslim Brotherhood.
However, the recent attacks on the revolutionary class may prove problematic to the regime. Despite numerous efforts,  accusations against the revolutionary activists were never solidified. As a matter of fact, the regime reversed its positions several times with regards to past events. Most recently, they acknowledged the Mohamed Mahmoud protesters as martyrs who died for a legitimate cause, even though the killings were performed by the police and supported by the army in November of 2011.
The acknowledgement took the form of a press statement by the police and a cheap monument erected in the middle of Tahrir square on 18 November, the anniversary of the events. They  may have thought that such a shallow gesture would be enough to placate the revolutionary class that had restrained its opposition to the regime for some time. The gesture failed to bring about desired results, mainly because there was more at stake for the revolutionary class than a memorial. The activists remain searching for accountability and real change in style of governance which never really took form.
The recent retaliation can perhaps be explained as frustration from the current regime because of failure to placate the revolutionary class. The attempt ended in a huge political triumph for the revolutionaries on 18 November 2013. This is perhaps why the police reverted to what they are accustomed to, attempting to provide a security solutions to what is essentially a political and social problem. Police have reverted to Mubarak era practices in order to bring about stability. The current regime spearheaded by the military is perhaps counting on its current popularity in the hopes that police may find a solution to the constant instability in the country.
It is my assessment that such measures will not work. The economic situation is far too dire and the alliances formed by the current regime representatives are too fragile for such oppressive measures. The regime is counting on a false sense of strength derived from their controlled media, security apparatus, judiciary system, army supporters and MB haters. Despite military fervor, the tide can still turn against them.
While at first glance, such institutions and tools seem to translate into formidable power, the government cannot continue to exert its hegemony over society without the consent of the numerous factions of society such as workers, students, activists, lawyers, and so forth. That is where the failure will come about – unless the regime can quickly undo the damage. This remains unlikely to happen considering how incompetent Egypt’s political class proved to be. The military, however, seems to have become more sensitive to public sentiments. There is a chance they may understand the potential shift in society that will be caused by the retaliation of revolutionary activists.
Despite the confrontational nature of these activists and their mistrust of the generals who they believe are ruling the country behind the scenes, the military’s worst enemy is its own police force charged with the country’s internal security. It is the corruption and incompetence of this police that will more likely eat away at whatever legitimacy the current regime has drawn from mass protests (which they now want to hamper).
At the end of the day, the military may soon realize that they  have no possible path for stability and consensus except through reforming the police, which they, not the activists, will need to do.  With such an obvious conclusion, the question remains whether the military itself is free enough of corruption to take such measures, and whether its own network of interests and false sense of security will burn the political class it is trying to build.

Originally published on Counterpunch.
Posted by Wael Eskandar at 3:06 PM