Why Torture the Innocent? 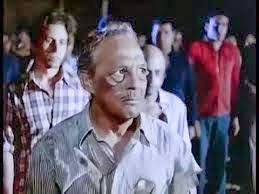 Why would the regime arrest and torture someone if they didn’t do anything wrong or if they can prove their innocence?

Such a question seems to be a common logical retort by many Egyptians in response to accusations that the regime, personified in its security and judiciary bodies, carries out gross injustices such as random arrests, assault, torture, beatings, illegitimate detention, sexual assault and killing.  At first glance it seems to cast a shadow over irrefutable evidence that the regime is indeed torturing many of its citizens, including the innocent. That is why we must remind ourselves of reality and attempt to answer that question: Why would the regime torture the innocent?

Perhaps the answer to this question is best illustrated in the 1979 film, ‘We’re the bus guys’ where two people are arrested after a fight with the ticket collector on a bus. They are taken to police headquarters and mistakenly transferred with political prisoners to a torture camp. They defend themselves by explaining that there must be some kind of mistake – that they’re the bus guys – but no one cares to listen. The warden doesn’t care either, he doesn’t necessarily disbelieve them but he’s under orders to get confessions out of all prisoners, after all, it’s not like the other political prisoners are more criminal in any way. Torture and humiliation ensue in the name of the country and the reason they ended up there along with the political prisoners gets lost along the way.

The story is set between 1966 and 1967 and is based on true events. Back then, the mukhabarat, Egypt’s intelligence services, were dominant in dealing with political security matters. They told the guards – the torturers – it was necessary to lock these people up, they were enemies of the state and Egypt would triumph if they were held in prison. In 1967, after Egypt was defeated in the Six-Day War, one question haunted the torturers: “Why were we defeated if we locked all the bad guys in?”

The story of the bus guys is the story of the Egyptian regime post 1952 when the free officers enslaved an entire nation. Power was in the hands of a few self-seeking individuals who profiteered from their positions and constantly fought to retain them. It remains very similar to the story today.

The keys to the dynasty changed hands within security services, but the regime’s indifference – and perhaps even contempt for its citizens – carried over. Upon taking over, President Mohamed Anwar Sadat arrested old power brokers within the government in 1971 to empower himself and keep their followers from regaining ground. Sadat attempted to uphold Nasser’s previous promise to end the ‘intelligence state’ by reforming the security apparatus already notorious for its harsh oppressive practises.

Under Sadat, there were moments where such practises were reduced considerably but the targeting of political opponents remained focused and old security practises were revived at various times. Towards the end of Sadat’s reign, state security had been more empowered to deal with the country’s internal politics.
In 1981, officers within the military conspired with extremist Islamists and assassinated Sadat. When Hosni Mubarak became president, more power was granted to the police represented by state security, the sadistic arm of the Mubarak regime. This was partly due to the assassination of Sadat, which meant that the military was not immune to infiltration and that mukhabarat failed to uncover the plot to assassinate the president. Mubarak was also attempting to sideline Field Marshal Abdel-Halim Abu Ghazala, the defence minister at the time and a popular figure within the ranks of the military.

By the 1980s and 1990s, state security had become so strong that it replaced intelligence as the main driver of the political agenda. Along with other factors, shifting control to the Ministry of Interior allowed one ministry to become both the judge and executioner, and thereby, torture became systematic by spreading inside police stations and over a much wider range of offences not limited to the political.

Under the firm grip of either intelligence services or state security, citizens’ rights and their dignity are disregarded. The current security apparatus is not trained to serve the people, but the regime. But regimes aren’t human and perhaps that is why most members of the security apparatus are dehumanised. On a more practical level, those inflicting the torture are quite separated from those making the arrests; they are taught not to listen and to inflict pain no matter what words are uttered by their victims.

Another way to describe it is that the regime does not care how many innocent lives they destroy, but how many threats to the state are averted irrespective of the cost. There are bound to be a handful of threats amidst the thousands they have arrested and killed. In the end, torturers are not held accountable because orders come from the main agenda drivers who protect the state and, in many ways, are the state. In all likelihood they do not think that torturing innocent people is a mistake in the first place.

The state has been consistent in its approach but the more worrying aspect of today’s Egypt is the silence – and even blessing – in response to such practises. Many have not only turned a blind eye, but even blessed the brutality of the state and created excuses.

Perhaps it is as American philosopher Eric Hoffer says, “The most effective way to silence our guilty conscience is to convince ourselves and others that those we have sinned against are indeed depraved creatures, deserving every punishment, even extermination. We cannot pity those we have wronged, nor can we be indifferent toward them. We must hate and persecute them or else leave the door open to self-contempt.”

Many Egyptians today believe that the police state can help solve the current crisis by offering some sort of stability. Researchers Thomas Plate and Andrea Darvi described it best when they said, “The tragedy of the secret police solution is that it is such a blunt and crude instrumentality that in the name of preserving paradise it winds up creating hell. And when even the moderate critics of the regime are eliminated, incarcerated, exiled, or intimidated, the secret police machine rolls on … Enemies of the regime will be created even if real enemies have long since ceased to exist.”

The fact of the matter is that we’re all the bus guys. To be subjected to grave injustice is just a matter of chance. It does not help if you do everything right, abide by whatever laws you can, cheer for the police despite their injustices, or keep to yourself. Sooner or later, you or someone close to you will fall victim to these injustices. By that time, it will not matter to security forces if you had been protesting their rule or cheering them on.

Posted by Wael Eskandar at 2:44 PM