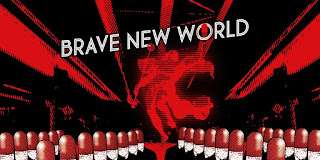 It's late at night and there's news of coronavirus all over the world. It's the starting sequence of a sci-fi movie, these are just the few seconds. What will come next is probably going to be uglier, because those who control where the world is heading are ugly. There will be no humbling experience except for the humble. This is what we've toiled for all those years. So that on this rainy day, the rich and the powerful can protect themselves and get even richer and more powerful. They control the little tax payments you make to their private interest. Now that it's time for you to collect what you're owed, you'll be thrown under the bus. This tax money was for their rainy day not yours. Money and resources will go to those who already have money and resources. You will continue to pay for their well being with your blood and sweat.

At a time when the world needs true leadership, those at the helm are anti-Science corporate bigots for the most part and those next in line are ancient relics whose only hope is to take us back 10 years ago when things were horrible but not disastrous. There is no collective hope to come out stronger as a society, but perhaps individual salvation is possible. We can recognize how fragile this world is, how meaningless businesses are in absence of life and health. We can recognize that race is a construct not respected by disease. We can recognize that we live in the disease of racism and xenophobia even though it's not biological.

Perhaps all these things are possible, but I lost hope in human's ability to learn from what they see. The reality is that emotions are stronger than rationale, and as sad as it is to realize it, if you keep pounding a message for decades, it becomes the truth, even if debunked by simple logic. Most of what we know is 'on authority', yet it surprises me how much people fight for something that's not their own, for a view that was force fed to them.
What happens next in our world. A worthy question. We realize we don't need to travel that much, we don't need to have that many conferences even though they are fun. We don't need to go out every day, even though that's fun. We recognize that we share a lot more than we thought. We share transport, we share the roads and we share supermarkets. Yes, that place where there is no escape from disease. The person at the cash register touches all your items, and touches your money. Anything there will be transferred.

I have thought of a way to get through this time, but I think I need a bit of science to formulate a plan. If only covid19 doesn't mutate or doesn't visit you twice, I would have had a perfect plan. For now there is nothing left to do but wait and hope, and now everything is a game of chance. Life is a game of chance. More so for the elderly than the young.
There's a moment when I realized we can all be potential killers. If we pass this to the vulnerable we can kill. I think that's true of many things. Our decisions, our votes. It was always so remote, but now it's closer. Your carelessness can cost lives. It won't be easy living with that, being the victim and the perpetrator, all at the same time.
But isn't that how we always are? We're gentrifiers, we're privileged. Even the privileged are victims of their own privilege and their blindness which they're born with. It's not their fault. To be born with privilege is to be born blind to injustices that should really not happen. Privilege is an exceptional normal state. It ought to be normal not to face injustice based on your skin color, it ought to be normal not to face discrimination based on your gender. It isn't though. It's only normal for the privileged.
The privileged are born blind with the duty to see. Some don't fulfill their duty, and end up moderates in an extreme world, guilty of perpetrating the status quo. Others are worse, they seek to entrench their privilege and utilize the status quo, altering it to dig us deeper into that abyss of injustice.
Nothing can even the odds at this point. The powerful don't need to normalize lying for everyone, they just need it for a big minority that are able to suppress the majority. They need the blind, they need the privileged, they need those who cannot see how entrenched we are in an extreme status quo. They need not be supporters, they need only be moderates, they need only be ineffective, obsessed with law and order at the expense of justice.
The movie's opening seconds are apocalyptic. It's just a disease with a mortality rate of 2% some say. Certainly true, but there is a kindness in the nature of covid19 that we are yet to appreciate. It's a warning sign nevertheless. It targets, very clearly, the vulnerable. In some ways it is asking us to protect the vulnerable. But we will fail even this simple test. We have not had adequate training protecting the vulnerable. We have a neoliberal world order that exploits them.
Is it reasonable to think that all of a sudden a new found care for the vulnerable will be born? It will not happen. The vulnerable are expendable. That's disaster capitalism, that's what it has practiced for years, but without the same attention as the virus, because the killers had to be out of the news. Condemn the greed, but not the greedy, condemn the system, but not the actual people responsible for it. That's the way of the world.
There is a small difference now though. The capitalists don't get to choose who they kill. The virus chooses and that's why they must rush to protect themselves, even at the cost of protecting the needy. Make no mistake, protecting the needy is a huge price for the rich and powerful to pay. Ordinarily they would not pay it. But in order to protect themselves, perhaps they must pay that ultimate price. Why not appear compassionate too while they're at it. They will find ways of profiteering from the disease anyway and the from the constraints that will be placed on the masses working for them.
We're going to work to pay this debt in the future. How dare we be helped by the powerful. It doesn't matter, our taxes will mostly go to them. They will be bailed out when they fail to steal from us properly. They will be bailed out when they 'erroneously 'declare war because they 'learn' and 'grow', and their followers find that commendable.
This is a crisis that offers an opportunity for us to grow and see the world for what it is. Just like I was exposed to the nature of power when I saw the streets of Egypt full of men with guns who wanted to enforce their rule and infiltrated all media to repeat their same old lies. I see the media around me full of these lies, they're a bit more clever, still not logical, but who cares. What really matters is that people don't care for logic and rational. They have their establishment 'intellectuals' feeding their egos, and filling their brains with status quo excuses.
Whether it's 1984 or a brave new world, it doesn't matter. It all looks the same after a while of observation. The brave new world is far superior of course. It's more fulfilling, it provides the illusion of freedom. But a moderate in 1984 and a moderate in a brave new world are the same. Nothing but fuel to feed the machines of control.
After the first few seconds of this movie, I don't know what happens. Maybe there will be heroes and villains that shape the world, but in these type of movies it doesn't matter. What really matters are the individuals that survive these events. What do they take with them from the old world is up to them.
To be honest, there's little to take from the old world except resistance to it. Maybe we can resist the inhumanity and injustices as we move forward. Maybe we can still fight against control and oppressive structures. That's still going to be worth something as we transition. I know that this is what I will try to take with me.
Posted by Wael Eskandar at 6:13 AM

Dark times, and never have I seen such dark thoughts from you. You have to resist, you have to fight until your very last breath. You owe this to yourself