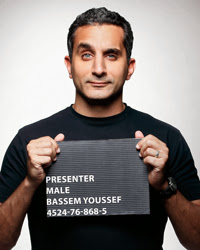 Posted by Wael Eskandar at 2:20 PM

Bassam Youssef is a Hypocrite just like many Egyptians are. Hypocrisy is very much part of Egyptian society in general.

Furthermore, Bassam Youssef is trying to implement a Western show with Western values in a part of the world that has different type of values. Egypt is an Arabic Muslims country, where it is not considered polite or normal (culturally, traditionally or religiously) to mock people, whether it is mocking someones mother, relative, friends or let alone a leader or president of a people.

In my opinion Bassam Youssef is a loser who has started in show business just for the sake of his own pleasure and fame and to show his opinions to a wider audience, without a certain purpose or cause.