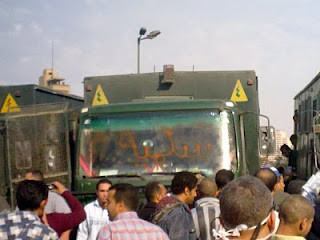 I write this now mostly to those who are not in Egypt, mainly because internet has been blocked amidst an intentional media blackout orchestrated by the Egyptian government, conspiring against its own people.

The complete and utter brutality of the Egyptian regime has never been exemplified as much as it has during the protests that started on 25 January of 2011. As I went out to protest, people around me were from all classes and all ages, yet contrary to what was reputed about the Egyptian characters, they were very responsible, peaceful and disciplined. Egyptians knew the rules of a protest well, to keep it peaceful and not to use foul language. For every one person who even thought of breaking these rules, there were 10 to point him back to the way chosen for this protest.

Unprovoked, the police would use tear gas, beat up protesters, and hire thugs with bats, knives and swords to intimidate and beat up citizens. All this is captured on video and yet the US refuses to act and continues to provide Egypt with weapons. Police fire live ammunitions on protesters and America remains silent. America supplies weapons to criminals who break the law put by their own country and the worst part is that they’re the ones trying to uphold it. Contrary to US popular belief, Egyptians are fond of Americans, but when the US does not practice what it preaches about democracy, freedom and human rights, people become wary of their treason to their own values. It’s not true that only Mubarak will serve America’s interests, unless America will only rely on dictators to serve its own end.

I may seem to have been sidetracked, but it only seems that way. It’s not the US, but the values that Americans and westerners can relate to that I’m really trying to express. Since I send this out to places with less oppressive regimes, I want to tell you that the reason I went out to protest are the values that west preaches.

I protest because it’s not enough to have money, one needs a sense of respect as a human being and we don’t have that. I protest because those who are poor do not even have the little respect I’m given. There are too many injustices and the regime sits idle, at most commending the bad and punishing the good. I don’t know how one can stand for that, and yet America does. I don’t know how one can be silent for 30 years and yet Egyptians have.

The world is silent, watching, waiting as a media blackout takes control of Egyptians. Governments like vultures watch and wait for an outcome, condemning weakly by voice, and not at all through action. It seems that money means more for governments than human lives. I know that this is not the sentiments of people it represents. I know that people in the US like Egyptians value freedom, dignity and equality more than they value selfish gains by unlawful dictators.

This is the situation in Egypt, if it wasn’t already clear to outsiders. Egyptians of course know all this. They are aware of the tyranny and oppression we’ve been faced with for 30 years. They know what it’s like to fight so hard for the simplest right and not get it. In one day, a decision to cut us off from the world was taken, and the aim was to slaughter us in the absence of media reporting and as I speak now, wounded people are unable to communicate with hospitals, families and friends in order to receive medical care. The country is up in flames and still the government imposes the media blackout.

It took Mubarak four days of the most intense protests in the history of modern Egypt to even begin to listen to what was being said. Even then he did not understand any of the concerns of the people and accused them of violence rather than his police and thugs. Who could accept a ruler like that?

If it takes so much effort to get nothing, what use is it belonging to a government like this? The government must change, cheating must change and the criminals that govern us must change. Is it too much to ask?

Posted by Wael Eskandar at 1:59 AM

What can anyone say? You see it from the outside -- the injustice, the imbalance, the human connection -- and you just want back in. To help. Maybe to suffer alongside. To individuate and to demonstrate to everyone that my republic no longer speaks for me.