Alaa AbdelFattah (@alaa) was detained by military prosecution for 15 days pending further military investigations. The news is all too reminiscent of 2006 when Alaa was arrested for partaking in demonstrations supporting the independence of judiciary in Egypt. 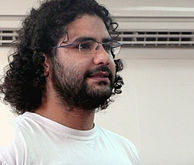 Alaa was summoned on bogus charges of inciting violence during the Maspero massacre. He was detained after refusing to acknowledge the legitimacy of the military trials for civilians as well as for objecting that the real culprits of the Maspero massacre are performing the investigations.

There is no evidence at all to support these charges. To get a clearer picture of how absurd the charges are, Mina Danial, who was killed by the army, possibly by snipers, was among those accused of the same charges.
The reason for targeting Alaa is perhaps due to his involvement in the revolution. We are witnessing the vendetta of a regime we failed to bring down. Alaa's last article in El Shorouk may have had something to do with it, where he explained how the autopsies of the martyrs helped implicate the army in their murder.
What we are witnessing here is not the utter incompetence of an investigative body but the reaction of a criminal asked to investigate his own crime. The criminal does everything possible to steer clear of any real evidence, and when the body of evidence is so overwhelming as it is against the military in the Maspero massacre, the result is as ridiculous as accusing a victim of their own murder.

Posted by Wael Eskandar at 6:04 AM