The simple fact of the matter is that we have an army that kills its own people. They used live rounds in previous incidents and in recent times added an Armored Personnel Carriers (APCs) running over unarmed protesters to their magnificent resume. The 'Maspero Massacre' is no isolated incident; it’s what soldiers have practiced for some time now. 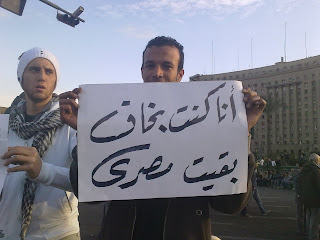 "I used to be afraid, now I'm Egyptian"

It may be unimaginable to a westerner what it’s like in a country ruled by a mafia, a group of sinister men who care nothing for human related values and will stop at nothing to attain personal gains. This state of affairs may be difficult to fathom for anyone from a somewhat civilized society or someone never exposed to the brutality of a third world country.

Let me explain what it’s like. It’s not an absolute nightmare; it’s closer to a jungle with skewed rules. The one thing you can do to survive is forfeit your freedom along with any rights you may think you have. You are not to have an opinion, because having an opinion may lead to voicing it and voicing it may lead to some action or may just offend the masters. These sinister men will shut you up, kidnap you, torture you and even kill you if you criticize them or threaten their lawlessness. So in a way you may yet survive this tyranny by keeping your mouth shut, but if you get in their way, they will literally crush you.

The real problem in dealing with these mobsters is when you oppose them and try and take what’s yours. They do not believe your money, property or rights are yours anymore. They believe that they are invaders who have the right to control everything about you. They are like an occupying foreign force. Calling for what’s right becomes very dangerous.

I am sure of the army’s treachery, I am sure of the threat to my life and my safety when I protest. That’s why it’s not easy for me to go out and protest despite my certainty of their evil nature. I must first consider the specific cause for which I’m marching for, and after that I have to consider whether I’m willing to get hurt for it, go to jail or risk dying for it. There are times like the Abbaseya march when I went out knowing full well we were walking into a trap. There are other times when I was sure that at midnight, the attacks would commence, like the day the Israeli embassy was rumored to have been stormed. There are so many elements that go into making this decision, and the freedom of assembly or any other human right is not something one can take for granted.

I must confess I’m not one of those Egyptians who have rid themselves of fear. I have the same fear of being hurt or killed while marching or going to a protest. I don’t fit the stereotype of a valiant Egyptian revolutionary who has overcome his fears and marches bravely ready to die for his cause. I care for my life and I would rather live a good life than die at a protest. Not having the courage to face death, I still go out trying to avoid it but prepared for the possibility of a chance encounter.

So why go out with all these fears and calculations? Why even risk it? Perhaps I choose to march out of fear itself, for fear that the future will hold more dangers for me and for generations to come. Perhaps out of hope and perhaps the promise of a better life. But maybe the main reason I march is because of another force stronger than fear, a force of dignity.

I was raised to reject slavery in all forms and so, despite everything, I decided not to be a servant of evil beings. I come from a world of freedom that exists in some way around me and has been transferred inside me. If movies, books and literature have poisoned my brain then they have done the finest job deluding me into thinking I deserve freedom and that human life and dignity are worth something. The sinister men have tried to instill a sense of low self-worth and indignity within us. But somewhere along the line, the idea that humans are born free and are worthy of a decent life has seeped through the cracks. Their plan to keep us all in check has failed somewhere along the line. I have been damaged beyond repair and now I cannot rid myself of the idea that I deserve to be free.

If u r poisoned with the ideas of freedom and dignity, then please keep on being so! i love ur words, they are genuine and powerful! Please keep it up and never lose hope in ur beliefs.