It’s been close to a year and a half of fighting. Not the fighting on the streets because that’s just manifestation of our real fight. We fought for values this past year and it seems to me we’ve lost this battle. 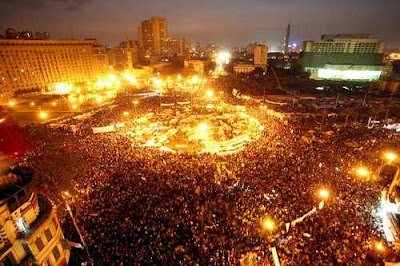 It is inconceivable to imagine that a regime that has long been accustomed to fraud would allow free and fair elections, but it is equally as inconceivable to believe that after mass mobilization, fraud would be possible without some sort of support base from the people. The true battle we’ve lost is not that Shafik made it to the run-offs but that there was enough of a support base to enable the regime to get away with this fraudulent outcome. In order to have overcome we needed to eradicate people’s desire for injustice and eliminate their fears and hatred. We failed.

It is a losing battle to choose one of the tyrants who have long been in opposition to one another. Going out on the streets won’t help much because we lost the thought battle, the battle for values. A majority of Egyptians have chosen fear, hate and injustice.

I will be told that it can’t be that martyrs died for nothing. But people die for nothing every day. However those people who fought for their freedom died for a more personal cause, they died for their values because they chose their values over the danger of dying. They died for a personal freedom not one for the entirety of Egypt. Most people remain chained by their fears and hatred. Most people are chained by the injustice they have actively sought.

It is time to fight for ourselves, those of us who share values with one another, who have not been lured by hatred, fear or the prospect of a selfishly happy existence at the cost of justice. Our only winnings are one another. The election scene has ended for us. We are offered a walk on part that I’d rather we not play.

We have played our part as best we could, but there are things that were beyond us. We got too arrogant and naively underestimated the lengths to which people will go to in order to preserve their interests. We were swayed and played, but we fought long and hard. We tried our best, but we had fewer tools than we thought we had. We have been at the forefront for much too long but now it’s time to acknowledge that the curtains on this act are coming down.