And the Winner is…

A quick recap of where we’re at this moment before the results are announced. This post will quickly lose meaning but it documents the state we’re in so that it cannot be falsified later. 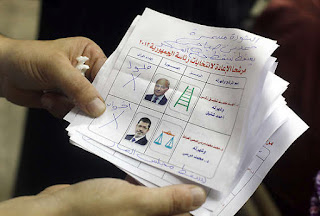 It was clear from the start that voting Shafik meant choosing Morsi. I believe the count to be in favour of Morsi despite all attempts at mobilization by the state to support Shafik. At the same time, despite knowing that the votes would amount to Morsi, it seems inconceivable for SCAF to name him as the winner of the elections because it would compromise their hold on the country. It was expected that SCAF would rig elections.

The constitutional annex on the second day of elections looks like a contingency plan for Morsi’s win. Instead of rigging the elections, SCAF rigged the constitution. It is a deeper and more vile form of rigging.

The Muslim Brotherhood have announced the results of the elections as they came in and declared to the public that Morsi was the winner. This was accompanied by statements by the Muslim Brotherhood that the constitutional annex was void and inconsequential. The annex would have the new president sworn in before the constitutional court. This would solidify the annex and therein lies the conflict.

It appears that the Presidential Election Committee (PEC) has postponed the announcement of results in order for SCAF to pressure the Muslim Brotherhood into accepting the constitutional annex. This deprives the MB of writing the constitution and more importantly set a president putting SCAF ahead of the president. Meanwhile, Ahmed Shafik’s campaign is celebrating a false win while PEC attempts to cook up the numbers. If the Brotherhood do not comply with the military’s ultimatum, SCAF will announce Shafik as the winner.

The Brotherhood have filled Tahrir square in preparation for this battle. Their soldiers are positioned there and ready. I’m not saying they will use any force, on the contrary, they are there to apply pressure. The tension is on, and people are ready to explode if SCAF announces Shafik as the winner.

This is where we’re at today. The unfortunate fact is that with such a power struggle there is no easy way out of this mess. One of the parties involved has to lose, but what’s worse is that in all cases, Egypt will lose.

Posted by Wael Eskandar at 2:44 AM