A Note on Military Personnel as Law Enforcers

A decree issued on 13 June now allows military personnel to act as police. The judiciary arresting authority granted to the military allows them to arrest and detain citizens in cases of threatening national security, possession or manufacturing of explosives, assault on authorities, destruction of public property, blocking traffic, hindering work or production and thuggery. 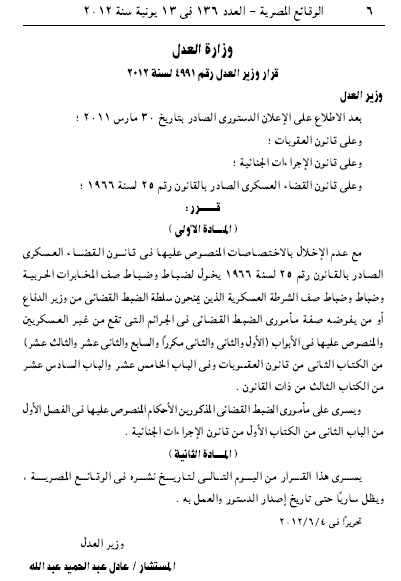 At first glance this just seems like an expansion of the police force, or a simple means of replacing uniforms without having to make new ones, but it’s not. The reason is that military personnel cannot be held accountable when breaking the law. Their testimony cannot be questioned by the general prosecutor.  What this really means is that the law circumvents the red tape and allows for legal military authority to bully Egyptian citizens and to stop them from going on strike or protesting. This is in effect a declaration of martial law.

The law enforcement decree is enabling a mafia to act with impunity on the streets of Egypt. It is a vital part of the soft military coup that has just taken place.


Update: On Tuesday 26 June there was a court ruling that halted the military judicial arresting authority. The decree was found illegal by an administrative court but remains in the constitutional annex and can be turned into law.

Posted by Wael Eskandar at 3:36 AM

Today I went online and found your blog really amazing, I think you have an amazing creativity I am happy to learn from you even can't be met in the real world.
Bio Hormone Replacement Therapy

It's good to know that there are decrees such as this one. It will surely be beneficial to the citizens in our community.