This is not time for I told you so. We all knew that Mubarak would be acquitted sooner or later. The sentence handed out by the dishonorable judge Ahmed Refaat is equivalent to an acquittal. 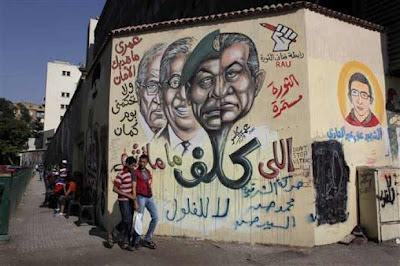 Many may argue that the prosecution's case was weak, which it was, but that's not the real reason an effective acquittal was given Mubarak and Adly. The opening statement insincerely delivered by judge Refaat were an indication of a man who sold his conscience to the highest bidder and was willing to use whatever language at his disposal to cheapen justice itself. He has betrayed justice in every sense of the word. His sentencing was certainly a political decision.

I know that people often wait for lawyers to interpret rulings, but I don't think it's necessary. The law is a means to justice and what we know for sure is that justice was not served. No matter how you twist it, no justice was served. If there was no evidence of who killed protesters, then why were Mubarak and Adly sentenced? If there was evidence, why were Adly's aides acquitted?

It's okay for sophists to argue the legality of the case, but the truth and justice are both clearer than legal jargon.  The injustice continues and I sometimes wonder if there is something more we can do other than protest.

It may be important to point out that Shafik, who views Mubarak as his role model, will most certainly pardon Mubarak when he is ordained president.

I know it feels hopeless now, but it's at times of utter hopelessness that Egyptians have managed to forge a third path away from the lousy alternatives presented to them.

Posted by Wael Eskandar at 5:38 PM